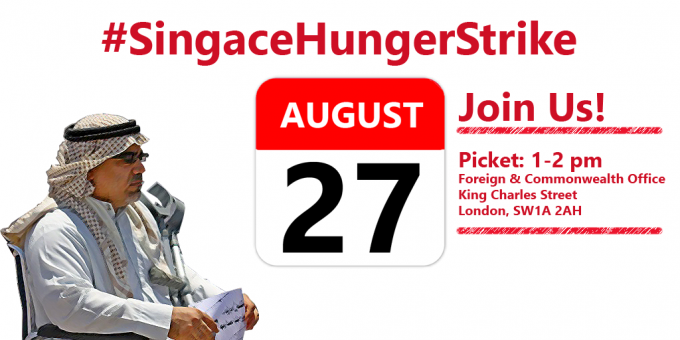 This month marks five years since prominent Bahraini academic and blogger Dr Abduljalil Al-Singace was arrested at Bahrain International Airport on 13 August 2010. Five years later, Dr Al-Singace is serving a life sentence for his peaceful opposition activities, and is currently being held in solitary confinement in a windowless room in Al Qalaa hospital where he is being held due to his poor health. This week he will reach the 160th day of his ongoing hunger strike in protest at prison conditions in Bahrain.

Since his arrest five years ago, Dr Al-Singace has been subjected to psychological and physical abuse. Dr Al-Singace suffers from post-polio syndrome, heart, eye, and sinus problems, and requires urgent nasal and ear surger,y but continues to be denied the specialist medical treatment that he needs on the grounds that he refuses to wear a prison uniform. He is also being denied access to writing materials and has not been allowed condolence visits despite the loss of two close family members in recent months.

Sadly, Dr Al-Singace’s case is far from unique. He is one of the Bahrain 13,  a group of high-profile activists, bloggers and others arrested for their role in the 2011 uprising, all of whom have reportedly been subject to ill-treatment during their detention. Indeed the Bahrain Independent Commission of Inquiry (BICI), established by King Hamad in 2011, found ‘that the NSA and MoI followed a systematic practice of physical and psychological mistreatment, which in many cases amounted to torture, with respect to a large number of detainees in their custody’.

To mark the 160th day of his hunger strike, international organisations will be coming together to call for the immediate and unconditional release of Dr Al-Singace and his colleagues, and for a full investigation into the allegations of torture he aims to highlight.

London-based organisations BIRD and English PEN will also be holding a protest outside the Foreign and Commonwealth Office, urging the UK government to take more visible action on behalf of Dr Al-Singace and to put pressure on the Bahraini authorities to end human rights abuses in Bahrain and its prisons. Please join us if you can.

Whilst we welcome the recent news that Dr Al-Singace is due to be allowed access to magazines and newspapers, something that he had been denied for several months, we remain concerned that he continues to be denied access to writing materials. Please consider bringing a pen or pad or paper to the protest that can then be sent to the Ministry of the Interior for Dr Al-Singace.

Even if you can’t join us on the day, you can still send a pen. And if you work for a magazine, please consider sending a copy as part of our latest campaign action.