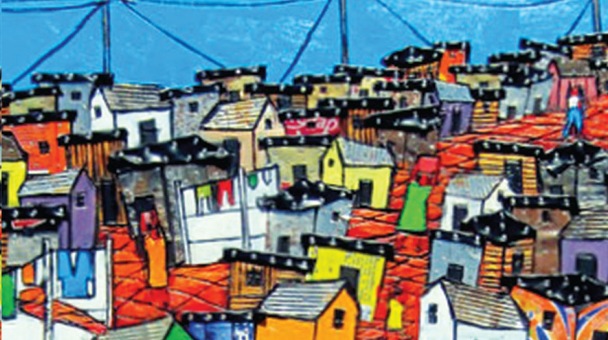 The final Book Club meeting of 2015 featured a discussion of a book from Angola: Our Musseque by José Luandino Vieira, translated by Robin Patterson. It was definitely one of those meetings where the chance to discuss the book heightened many members’ appreciation for it.

1: The episodes that stood out varied from reader to reader. They included the bulldozing of Mrs Xica’s home, the chaos of the handing out of toys and Xoxombo’s fatal goring by the goat. Which did people find the most memorable?

2: It was suggested that the book is perhaps better seen as a collection of short stories, especially given that the chapters aren’t chronological. Combined with the limited information on the narrator, does this emphasise the book as a portrait of a community, where there isn’t necessarily an objective truth and the telling of stories itself is part of what binds people together?

3: Robin Patterson’s translator’s note mentions that he felt it would be foolish to try to recreate the blends of Kimbundu and Portuguese in which the original was written. We discussed this in relation to the dialogue. Might it have helped to signify the ethnic mix? Or did this reflect the lens of the storyteller’s perspective?

4: This is a tough one, given how little there is out there: can anyone recommend other Angolan books worth trying (perhaps even books out of print now that should be reprinted)? We were disappointed, for instance, to discover that José Eduardo Agualusa’s The Book of Chameleons doesn’t seem currently to be available.

5: Finally, as 2015 draws to a close, what was your favourite translated read this year?