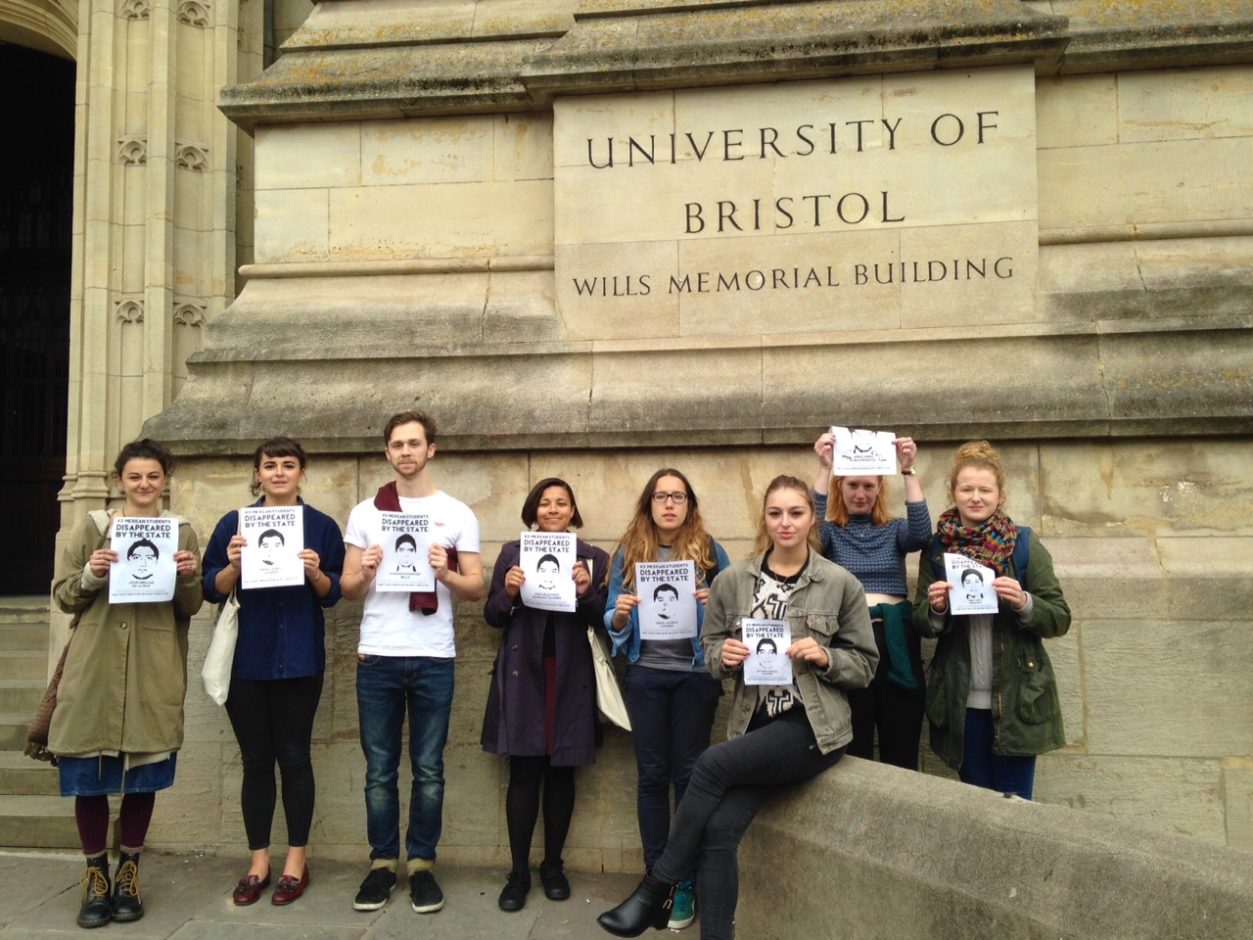 We’ve had a busy term so far and we’ve still got lots of plans for the rest of the academic year. To welcome our new members and introduce them to the city, we held a campaign tour around Bristol for the 43 Mexican students from Ayotzinapa, marking a year from when they were disappeared by the government. The photos we took of the missing students’ faces next to Bristol landmarks have been actively shared around Twitter, and we hope that they’ve contributed to the international campaign on behalf of the students.

In October, we were really excited to welcome English PEN’s President, Maureen Freely, to give a talk about the charity and what we do. She spoke about her experiences with challenges to freedom of expression in Turkey, particularly in relation to her work with author Orhan Pamuk who was prosecuted in 2005 for openly discussing the killing of a million Armenians in 1915. Ten years on, she told us, the situation in Turkey has hardly improved with the government clamping down on the authors of any material not to their liking.

Maureen reminded us of the important role that all PEN centres play in continuing to actively challenge such threats to freedom of expression, which persist, around the world. Along with our campaign for the students from Ayotzinapa, Raif Badawi is a key focus for us at Bristol Student PEN. Last year we held a vigil for the Saudi Arabian blogger, who has been sentenced to 10 years in prison and 1000 lashes for blogging about liberalism. We started a photo petition with the hashtag ‘FREE RAIF’ and managed to get over a hundred photos, which we are still tweeting to add to the pressure on the Saudi Arabian government to release him.

Saudi Arabia has a poor human rights record, of which Raif is just one of the victims, however the international community has failed to adequately condemn the country’s human rights abuses. In fact, Britain’s ties to Saudi Arabia are so close that David Cameron felt justified in spending over £100,000 to attend the late King’s funeral in October.

Britain’s support for the repressive Saudi Arabian leadership brings us back to freedom of expression in this country. In her talk, Maureen explained that having lived under an oppressive regime she was hyper-aware of the danger signs that threatened freedom of expression, and mentioned that the complacency of the British population towards such danger signs baffled her.

Theresa May’s prevent strategy to fight non-violent extremism, launched at the beginning of October, is one such sign which we, at Bristol Student PEN, have been discussing with our members. The strategy will increase Ofcom’s powers to pull programmes if their content is deemed ‘extreme’ and demand that internet service providers remove any ‘extreme’ material.

We are concerned that the ambiguity of what constitutes extreme has potential to allow for the censoring of material which may not pose any real threat to national security. The police have already employed these new regulations to seize a BBC Newsnight journalist’s laptop, which has sparked fears that journalists will be unable to efficiently report on sensitive issues because sources will refuse to give evidence in fear of police intervention.

Maureen ended her talk by reminding us that, even in a democratic country, it is essential to exercise our freedom of expression by continually challenging the government and demanding transparency on matters such as the counter-terrorism strategy. We know that this message resonated with our members and we hope that our activities over the rest of the year will emulate this.

Today (November 15) marks the International Day of the Imprisoned Writer. In tribute to all prosecuted writers around the world, we’ll be collaborating with the Bristol drama society, Spotlights, later in the term to showcase an Empty Chair reading. We have selected a range of work by authors who have been imprisoned, which will be performed by students with an empty chair to represent the writer who cannot be present. We are looking forward to putting this on and we’ll keep you updated on how it goes.

Keep your friends close and your PENemies closer,