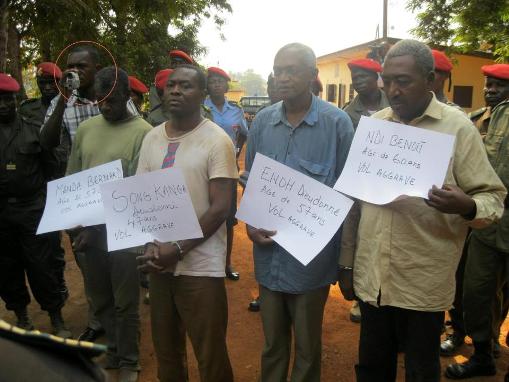 On Thursday 19 March 2015, in accordance with statements made by Judge Gilbert Chilick and the president of the military criminal chamber of the Centre’s Court of Appeal, my trial was finally due to commence.  On the Wednesday evening, however, we were startled to learn, from the prosecutor, that the judge would not be present.  We, the accused who expected to be tried the next day, were plunged into a state of turmoil and despair by this news.

Nevertheless, on the Thursday morning, the warrants for our removal having been delivered to the prison the preceding day, all of us who were due to appear before the military Court of Appeal were called, and handcuffs attached to our wrists in the usual way.  A few moments later, we were overwhelmed by terror and panic when we realised it was already 9.00 a.m., the judge having indicated at the previous hearing (in February) that he would open proceedings at exactly 9.00, and that these would continue all day and late into the night.  We were still within the prison walls at 9.00, and at 9.30.  At 10.00 we were still there.

It was not until 11.00 that we were loaded into the cursed prison truck; we therefore arrived at the Court at 11.30, which was of course far too late.  Indeed, we had scarcely descended from the truck than he declared the hearing postponed…  Not for a month, this time, however – but for a mere ten days, to Monday 30 March.

Accustomed as we are to the adjournment of our hearings for 30 days, we were naturally very relieved; in fact we almost cried out with joy. ‘At last, a judge who takes us into consideration – the last one had had an air of total indifference when sending us away for a month…’: that was how most of the prisoners who had been brought before Gilbert Chilick at the court felt.  So we were satisfied with the judge when we arrived back at the prison, but mad at the prison authorities – whose unprecedented disorganisation at the very moment of our scheduled departure for the court had, in our opinion, led to the adjournment of our cases.

The head of the administrative department immediately called us in to reassure us that we would be in court before 9.00 on Monday 30 March.  As the spokesperson for the group, I clearly and courteously pointed out to him that if we arrived late at court on that day because the warders had once again made a complete mess of things when we were due to leave, the drug addicts with whom I had left for the court and returned to prison had sworn they would go on the rampage.

His reply: ‘I can understand that.  Life in prison isn’t easy – but on the other hand, the magistrates have us remove 300 inmates at once, and the risk of escape is much higher as we haven’t enough handcuffs…’.

Nearly two years have now passed since Meyomesse’s lawyers first succeeded in having his case referred to a civil court for appeal in April 2013, during which time numerous appeal hearings have been postponed due to  legal technicalities.