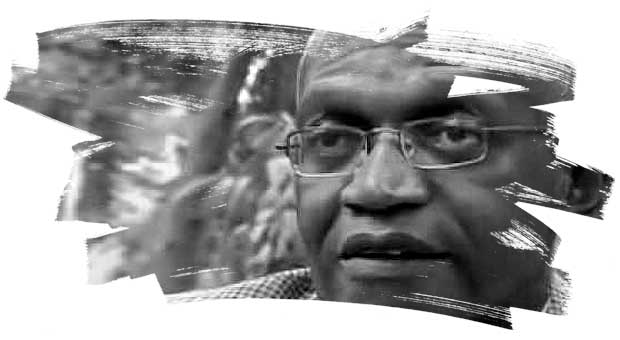 To the President of the Republic:

A few years ago, during a year-end speech to Cameroon, you reflected on justice in Cameroon and denounced corruption. Countless citizens applauded, delighted to discover that you were aware of the indiscretions of our judges. However, we expected that this would be followed by mass arrests… and we continue to wait. Can a magistrate not go to prison? We who find ourselves here, do we die here? Are we not citizens like them?

For now, Mr President, I will just draw your attention to the flippancy that characterises these men who, Penal Code in hand, send citizens of Cameroon to prison and forget them, over which no one has any power, except you. I do this because I am their victim.

I have appeared 21 times, not one less, before the Court of Appeal. Twenty-one months of being paraded before judges without it ever being possible for me to open my mouth. I am taken from the prison, I climb into the infamous prisoner truck, naturally in handcuffs because it is feared that I may escape (monumental foolishness, where could I go, being so well-known?) I get into the courtroom, the judges take their turn to majestically make their entry, everyone rises, they sit, us too, they begin to call names, they call mine, my handcuffs are removed, I stand before them. Are you Mr. Enoh? Yes, I am, they begin to consult one another, they look left then right, they ask if the lawyers are there, yes, they are, they ask if the witnesses are there, no, hardly any exist. Oh good! They ask if the complainants are there, no, hardly any of those exist either, oh even better! Ah, how curious, they consult one another again, start to tap their pencils on the table, still consulting one another, look at me quizzically through their glasses, then the President of the Court announces to me: ‘Hearing adjourned to the next session for hearings, rest assured Mr. Enoh, we will judge you.’ Next case.

Twenty-one times I have heard this, like a broken record. I know it by heart. The ‘next session’ means a month of waiting, not including public holidays, then ‘the Court is not complete, adjournment’.  Twenty-one times I have heard ‘the next session, rest assured Mr. Enoh, we will judge you’. The whole of 2013 passed quietly by, without me even opening my mouth once before my judges, then all of 2014 passed quietly by, again without me opening my mouth, and now 2015 has begun.

‘We will judge you.’

At the ‘next session, rest assured Mr. Enoh, we will judge you’. On 18 December 2014 I was released from prison, as usual, in handcuffs, because they remain convinced that I’ll escape otherwise… They made me climb into the cursed truck, I was led to the tribunal, installed in the hearing room, and all of us who came from Kondengui, we waited for their Excellencies, the magistrates, from 11:00 to… 15: 30, four long hours, in vain. Finally, we begged the prison guards to call the cursed truck to take us back to the penal colony, for there at least we are not handcuffed, and can enjoy the rays of the sun.

A tour in town for nothing, without even being able to see it, because we can see Yaoundé – its pedestrians, its cars, its motorcyclists, its street vendors, its police and its gendarmes – only by peeking through the mesh portholes of the truck that frightens the whole city except for us, we have become accustomed to it.

I requested bail. The Court ‘unanimously’ declared my request inadmissible. At the ‘next hearing’ the Court finally agreed to judge me. My heart began to pound with joy. Everyone in the room gives a huge sigh: finally! But, wham. The military assessor asks the following question: ‘There is a soldier among you, is there not?’ Answer: Yes. ‘Then, why is he not in uniform? I am opposed to any trial at which he is not in uniform.’ He just discovered this in the… 17th hearing, not one less. This soldier has paraded in front of him for 17 months, without him having noticed that he was not in his uniform. Our lawyers are trying to remind the Court that it is prohibited for an inmate to wear any uniform whatsoever at Kondengui: but there is nothing to be done. ‘I oppose the trial, as long as he is not in uniform’. New adjournment: at ‘the next session, be assured, Mr. Enoh, you will be judged’. Since this evil invention of the military assessor to block the trial, months have passed by without ‘the next session’. The trial has still not begun…

Victim of a conspiracy

President of the Republic, put yourself in my place, how can I not think that I am the victim of a conspiracy designed to never judge me, in other words, so I never see my freedom? Application for provisional release: rejected ‘unanimously by the members of the Court, but be assured, Mr. Enoh, you will be judged’. Judgement: at the ‘next session’. An impasse. The months pass by. The years. Everything in my life is collapsing around me. My kids don’t go to school. Their tuition has stopped. They were evicted from my home. I am reduced to less than nothing. Does justice, like that of Cameroon, which is here to destroy the soul in peaceful human beings, still deserve to be called ‘justice’? Doctors know what illness is like, since they also fall ill. When treating their patients, they know how much a drip hurts when it perforates the skin looking for a vein. But, magistrates, do they know what it is to end up cut off from everything for years? Do they know what it is to find oneself in a prison, to suffer years of body searches and other humiliations?

I ask you to intervene, in your capacity as President of the High Council of the judiciary, not so that I am released, I alone am responsible for the argument I intend to make, but simply so that I am judged. I ask nothing more from you.

Translated by Laura Hargreaves. The full version of this letter originally appeared in French on NjanguiPress.com in a piece by Joel Didier Engo.

Laura Hargreaves is a freelance translator and writer, specialising in literary translation from French and Spanish into English. She also runs LanguagesbyLaura.com, a team of freelancers working together to provide creative language services. Laura’s main area of interest is poetry, in both her translation career and in her original writing. As a passionate supporter of PEN International and a member of English PEN, Laura is very proud to be able to work closely with both organisations in order to help ensure that the voices speaking out for freedom of expression, and for the freedom to read and write, are heard clearly throughout the English-speaking world.