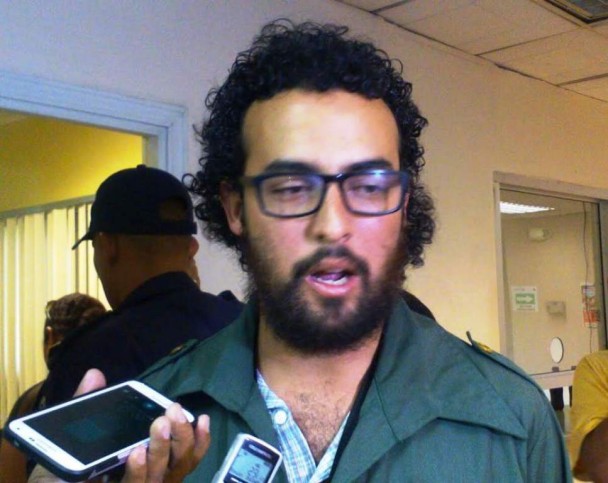 Cesario Alejandro Félix Padilla Figueroa, journalism graduate, student leader, and board member and founding member of PEN Honduras, has faced prosecution, threats and harassment for his part in on-going student protests at the state National Autonomous University of Honduras (UNAH) in the Honduran capital Tegucigalpa since 2014. The protests are calling for an end to plans to privatise the UNAH and for the democratisation of the university’s governing bodies. PEN believes that Padilla and his fellow students are being targeted for the exercise of their rights to freedom of expression and assembly.

The UNAH has successfully sought criminal charges to be brought against Padilla and other students for ‘usurpation’ of property and other related charges in two separate cases, brought in July 2015 and June 2016 respectively. The latter case has since been dropped, but Padilla still faces criminal conviction and a possible prison sentence of up to four years if found guilty in the 2015 case. (See Background for details.)

Padilla has also faced harassment and surveillance. On 15 August 2015, he reported that in the previous few days he had been tailed by two unknown armed men in his neighbourhood who had also been keeping watch over his home. The men had made it known to Padilla that they intended to harm him. He and PEN Honduras believed that this surveillance was in retaliation for his activities as a student leader. He feared for his safety.

In June 2016, Padilla and some of his co-defendants reported that they had been subject to unlawful surveillance by agents from the Technical Agency for Criminal Investigations (ATIC), who attempted to prevent the students from entering the university campus, among other irregularities.

Share details of Padilla’s case with friends and colleagues and on social media. Please use the hashtag #FreePadilla #ImprisonedWriter

Write to the Honduran authorities:

Please copy your appeals to the Embassy of Honduras in your country. Details of Honduran embassies may be found here.

On 17 July 2015, Padilla – along with fellow students Moisés David Cáceres, Sergio Luis Ulloa and Josué Armando Velásquez – was charged with ‘usurpation’ of UNAH property, under Article 227 of the Honduran Penal Code, for his part in the occupation of a university building during a student protest. If convicted, he faces a prison sentence of between two and four years. The prosecution presented its evidence on 28 June 2016, and the Criminal Court is due to issue its sentence in writing. It will also consider the appeal made by Padilla, Cáceres and Ulloa against their suspension from the UNAH in 2014 (see below).

Charges against six students including Padilla related to fresh protests in June 2016 were dropped in July 2016.

As of 18 October 2016, mediation efforts were underway to try to reach an agreement with the UNAH and the court to drop the case against Padilla. PEN Honduras and the UN Office of the High Commissioner for Human Rights in Tegucigalpa are involved in the talks.

Padilla and five other UNAH students, including Cáceres, Castillo and Ulloa, who were all members of a student committee where they document alleged human rights abuses within the UNAH (Comité Pro Defensa de los Derechos Humanos) were arbitrarily suspended from the university in December 2014 after taking part in previous protests. They were subsequently re-admitted to the university after a ruling by the Honduran Supreme Court of Justice in February 2015.