Egypt: PEN joins call for the release of Sanaa Seif 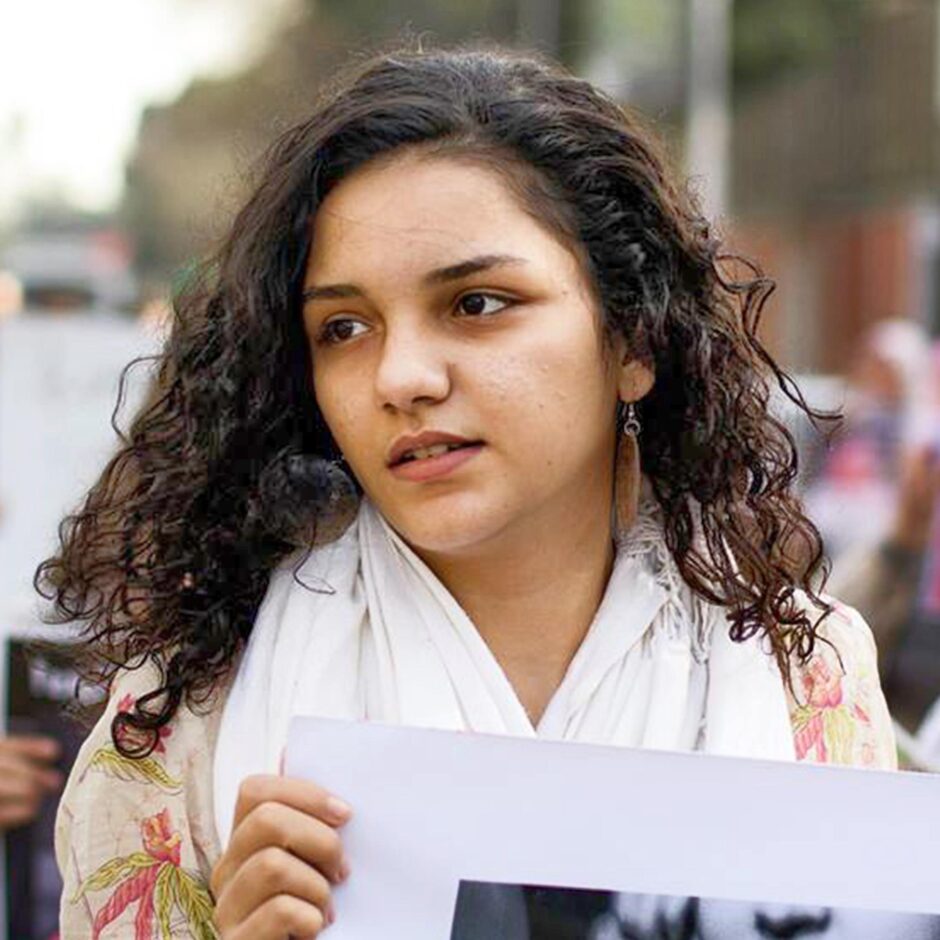 On 21 June 2020, Sanaa Seif, along with her mother and her sister, were sleeping on the pavement outside Tora Prison in Cairo. Since the COVID-19 outbreak, Egyptian authorities have put prisons into an information blackout. Sanaa and her family were there to insist on their simple legal right to receive a letter from Sanaa’s brother, the well-known activist and blogger, Alaa Abd El-Fattah, who has been held without trial since September 2019, having already – and recently – completed an unjust five year sentence.

The following morning, 22 June, they were attacked by a group of plainclothes women who took instruction from the prison guards and policemen. They were severely bruised, had most of their possessions stolen and Sanaa suffered an injury to her head.

The next day, 23 June, they went to the Public Prosecutor’s Office to report the incident, and it was then that Sanaa was abducted by plainclothes policemen. Torn from her lawyer and pushed into an unmarked minivan, she was taken to Egypt’s Supreme State Security Prosecution, which is notorious for detaining political opponents and critics in prolonged pre-trial detention over unfounded ‘terrorism’ charges. Prosecutors questioned Sanaa and ordered her detention pending investigations over charges of ‘spreading false news’, ‘inciting terrorist crimes’ and the ‘misuse of social media’. Neither Sanaa nor her lawyer were allowed to see her file.

Sanaa is a film editor, writer and activist. She worked on the Oscar-nominated documentary The Square, and the award-winning film In the Last Days of the City. She is just one of hundreds of artists, lawyers, journalists, LGBTQ+ people, writers, publishers, librarians and translators held in prison in Egypt today.

Sanaa is the latest in a seemingly unending series of arrests that have come to define president Abdelfattah Al-Sisi’s rule. Tens of thousands of politically motivated detentions have been documented by human rights organisations; at least 16 new prisons have been built in the Sisi era. Meanwhile, courts and prosecutors have been extending the pre-trial detention of detainees without their presence in court. Thousands have found themselves trapped in endless cycles of administrative detention, renewed indefinitely, without ever going to trial.

In June this year, Sarah Hegazy, unable to recover from her detention and torture, took her own life. She had been arrested for flying a rainbow flag at a concert. In May, Sanaa’s friend Shady Habash, a 24-year-old film director who was involved in making a music video critical of Egypt’s president, died after prison authorities failed to provide him with medical care. He had ingested alcohol sanitizer. He had been held for over two years in pre-trial detention. A few months before his death he wrote:

The solidarity of the international community is needed now more than ever at this time of unprecedented breakdown of accountability.

Together, we call on the Egyptian authorities to immediately release Sanaa, Alaa and all those detained for peacefully exercising their rights.

We call on the Egyptian government to end the abuse of pre-trial detention.

And we call for a global assertion of the rights of all people to live in dignity and justice.

Visit the Free Sanaa Campaign website for a full list of signatories and to add your support. #FreeSanaa