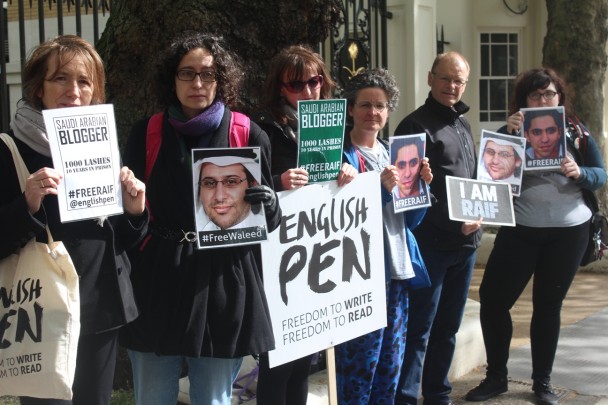 Badawi was sentenced to ten years in prison, 1,000 lashes, a fine, a ten-year travel ban and ten-year media participation ban for ‘insulting Islam’ and ‘founding a liberal website’.  English PEN considers the conviction to be a violation of Raif Badawi’s right to freedom of expression.

The first 50 lashes were administered in January, prompting international condemnation.  Further scheduled floggings were postponed.  English PEN members have staged a series of vigils outside the Embassy of the Kingdom of Saudi Arabia, demanding that Raif Badawi’s conviction be overturned and that he, and his lawyer Waleed Abulkhair, be unconditionally released.

It is disappointing that the court has ignored the global outcry at this conviction.  Raif Badawi’s writings and protest have always been entirely peaceful.  The decision to uphold this disproportionate punishment is clearly intended to discourage any kind of political or cultural opposition in Saudi Arabia.  We appeal to King Salman to intervene in this case to prevent further lashings from going ahead and call for Raif Badawi’s release.

We also call on the British Government to express its dismay at this case and to review its relationship with Saudi Arabia, in the light of the Kingdom’s dismal human rights record.

Collaborating with other human rights activists including Peter Tatchell, the Campaign Against Arms Trade, and Index on Censorship, English PEN is convening a Day of Action on 17 June.

We will be holding a protest opposite 10 Downing Street from 1.45pm and delivering an open letter to the Prime Minister calling on the UK to take action, and our Director Jo Glanville will be among those speaking at a public meeting in parliament from 6.30pm. We are also encouraging PEN members and supporters to write a letter of protest, sign a petition, and to spread the word via social media by supporting this Thunderclap.