Skip to content
Home > Campaigns > In memory of Carole Seymour-Jones

In memory of Carole Seymour-Jones 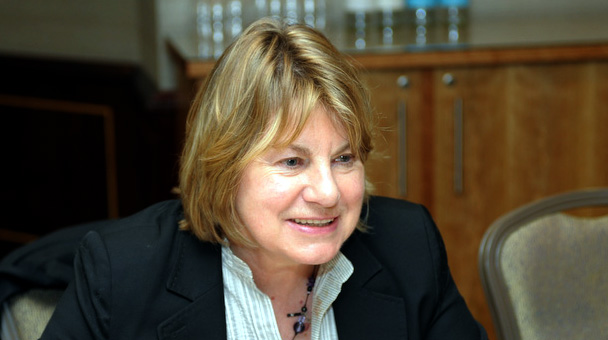 Born in Wales in 1943, Carole Seymour-Jones’s childhood was spent as a self-confessed bookworm. She described herself as an omnivorous reader who devoured historical fiction and non-fiction, from Georgette Heyer and John Buchan to Edward Gibbon and AL Rowse. The diversity of her literary tastes and love of both fiction and non-fiction continued throughout her life. Educated at Lady Margaret Hall, Oxford, and Sussex University, she became the acclaimed biographer of Beatrice Webb, Simone de Beauvoir and Vivienne Eliot, while her most recent book examined the life of Anglo-French SOE agent Pearl Witherington. She cited fellow biographers Richard Holmes and Hermione Lee, plus historian Antony Beevor, among her influences . A teacher of creative non-fiction, memoir and biography, Carole was a Visiting Fellow at the University of Surrey, a regular broadcaster, and judge of the Biographers’ Club Tony Lothian Prize. However, for those of us at English PEN, she will above all be remembered for her astounding dedication to the Writers in Prison Committee (WiPC).

When Naomi May, another cornerstone of the WiPC, died in July 2014, Carole was typically the first to offer her condolences, and to write a piece in memory of her dear friend.

When in the 1990s I joined English PEN, at that time happily installed in Dilke Street, Chelsea, over the Sketch Club, Naomi May was already a member of the Writers in Prison Committee. She inspired me to join the WiPC, talking eloquently about the work it did on behalf of imprisoned writers around the world: the demos outside embassies and high commissions, the petitions, the annual St Bride’s Service on the Day of the Imprisoned Writer – but most of all, about the letters (and books) sent to individuals to remind them that, although within prison walls, they were not forgotten by their fellow writers.

From those early days, Carole became closely involved with the work of the WiPC, which she described as ‘the beating heart and moral compass’ of PEN, and inspired many others to do the same. In December 2004, she was appointed chair of the committee, a role she cherished and excelled in for six years. During that time she organised and attended countless fundraising events and demonstrations; co-edited the remarkable English PEN anthology Another Sky: Voices of conscience from around the world with Lucy Popescu; lobbied governments and ministers; and visited imprisoned writers and their families around the world.

Appropriately, Carole was heading up the Writers in Prison Committee as it marked its 50th anniversary in 2010. In a special anniversary edition of Index on Censorship, Beyond Bars: Fifty Years of the PEN Writers in Prison Committee, Carole wrote a piece celebrating some of the achievements of 50 years of fighting for writers’ freedoms – many of which she had played a crucial role in – and highlighting the ongoing need for solidarity between writers:

Sometimes a case seems hopeless, particularly in the cluster of countries, including Burma, China, Cuba and Iran, that still use long-term imprisonment as a means of censorship. But PEN never loses hope that the oxygen of publicity may bring about release, however long it takes, as well as providing psychological support to prisoners…

Politics and writing continue to intersect, throwing up new challenges to those working to protect the rights of poets, playwrights, critics, journalists and novelists. Across the globe people are signing up to PEN’s central mission; to promote the freedom to write. It is as important now as it was in 1960.

Carole was exactly right: threats to freedom of expression remain rife and there is so much more to be done. All we can hope is that future generations of writers and PEN members seek to address these issues and show support for their fellow writers with the same enthusiasm, dedication, energy and warmth as Carole always did.

We will forever be proud of what Carole achieved during her time at PEN, and what we will continue to achieve thanks to her involvement. She will be hugely missed by all who had the honour of working alongside her during her many years here at PEN.

Carole Seymour-Jones was a remarkably dedicated advocate for writers at risk and a highly committed member of English PEN. We are all indebted to her for her support and generosity of spirit. Her death is a shock for us all and everyone at the charity is deeply sad. We send our condolences to her friends and family.

Carole’s eldest daughter Emma has now set up a memorial and fundraising page in her memory so please do visit that and take a moment to leave a message or make a donation if you can: caroleseymourjones.muchloved.com

Please also send your memories of and tributes to Carole to [email protected] and we will share them with her family and add them to this page.

A memorial service for Carole will take place at 11.30am on 15 October at St Bride’s Church in London. All welcome.