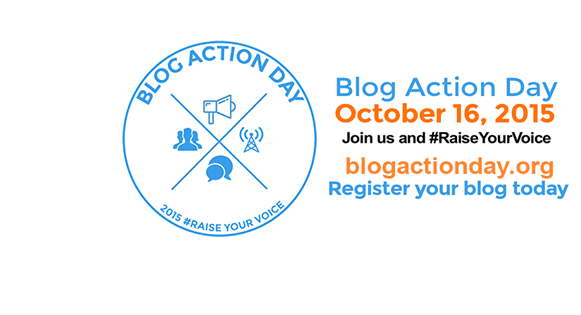 What is your name and what do you do at English PEN?

Cat Lucas – I’m the Writers at Risk Programme Manager here at English PEN where I run our international campaigns on behalf of writers, bloggers, and other literary professionals at risk around the world.

What is English PEN, where is it based and why are you interested in supporting Blog Action Day?

English PEN, the founding centre of  an international association of writers, is based in London. However, our members and supporters live all over the UK and beyond, and we have a network of Student PEN Centres on university campuses from Bristol to York, who support and promote the work of PEN.

English PEN is also one of over 100 PEN centres all over the world, all of which work to support writers and writing at home and abroad in a whole range of different ways.

This week, representatives of many of these centres are in Quebec, Canada, for the 81st PEN International congress. (For updates from the congress follow #PEN81Congress on Twitter.)

We are keen to support this year’s Blog Action Day because the theme, Raise Your Voice, sums up the work PEN has been doing for almost 100 years.

What is the mission of English PEN?

English PEN promotes and defends the freedom to read and the freedom to write here in the UK and around the world. From defending the rights of persecuted writers to promoting literature in translation and running writing workshops in schools, refugee centres, and prisons, English PEN seeks to advocate literature as a means of intercultural understanding, encouraging the friendly co-operation of writers and free exchange of ideas. We also run campaigns closer to home, such as the ongoing Libel Reform Campaign and Don’t Spy on Us.

What are you Raising your Voice about on October 16?  Tell us about a current campaign your organization is working on you’d like to highlight to our blogging community.

This year we are asking Blog Action Day participants to raise your voices for our colleagues at risk around the world, many of whom have been detained or punished as a result of their online activity. It’s entirely up to you who and what you write about, but if you need some inspiration here are a few of the many writers at risk around the world that PEN members are currently supporting:

Why is blogging and open access to the internet important?

The rise of the internet, and of blogging and social media in particular, has changed how the world views writing and publishing. This has been a real game-changer for PEN, an organisation that for almost 100 years has sought to protect and promote the freedom to write and to read, and a core part of our work – the defence of writers at risk – has swelled as dissidents across the globe pay harsh prices for their online activity.

However, the internet has also enabled us to access information more readily, to know about cases as soon as they arise, and to be in constant contact with activists on the ground. And it has transformed the way in which organisations like ours campaign and advocate on behalf of our colleagues around the world.

Why do you think that it is important for people to raise their voices?

Because so many people are unable to do so, or pay a very high price when they do.

Who do you find inspiring for raising their voice?

Too many to mention, but the cases we’ll be highlighting this year, including Saudi blogger Raif Badawi and Bahraini academic Dr Abduljalil Al-Singace, are all hugely inspiring in their own ways. Indeed, the courage that many of our colleagues display every time they write, often at great risk to themselves and their families, is a constant source of inspiration.

What can ordinary people do to highlight a situation or support someone who voice has been silenced?

Every year, hundreds of writers and other literary professionals around the world are imprisoned, prosecuted, persecuted, attacked, threatened, forced into exile or even murdered as a result of their work.

PEN seeks to defend and support these writers and their families, to pressurise governments where the right to freedom of expression is under attack, and to help bring about the necessary changes to make the freedom to write a reality around the world, but we can’t do it without our members and supporters.

There are countless ways you can support writers at risk around the world. Here are a few suggestions:

If bloggers could do one thing today to make a difference what would it be?

How do you think that an event like Blog Action Day can make a difference?

By highlighting the issues facing writers and writers around the world, as well as boosting awareness of organisations like ours that seek to support and defend them.

English PEN is proud to be one of the Editorial Partners for this year’s Blog Action Day. To find out more and get involved visit the website or follow #RaiseYourVoice #FreeToWrite on Twitter.  http://www.blogactionday.org/