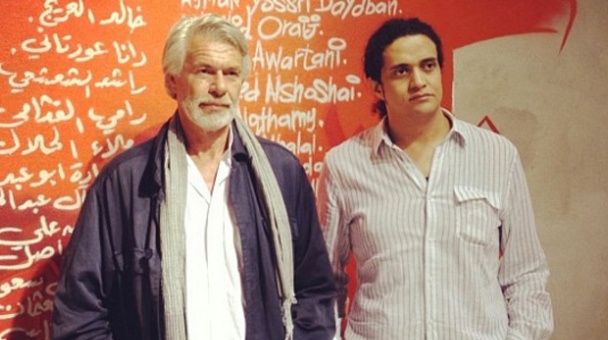 PEN is appalled at the news that Ashraf Fayadh, a poet, artist, curator, and member of British-Saudi art organisation Edge of Arabia, has been sentenced to death. According to reports, Fayadh, originally sentenced to four years in prison and 800 lashes in May 2014, is now due to be executed following a retrial.

Fayadh was first detained in August 2013 in relation to his collection of poems, Instructions Within. He was released on bail but rearrested in January 2014, accused of ‘atheism and spreading some destructive thoughts into society’, before being sentenced in May 2014. The dismissal of his appeal led to the retrial which concluded earlier this week. Fayadh is reported to be ‘really shocked’ by the sentence, stating, ‘I didn’t do anything that deserves death.’

We are shocked by the news that a Saudi court has ordered the execution of poet Ashraf Fayadh. This is yet another example of the Kingdom’s complete lack of respect for freedom of expression and its persecution of free thinkers. We call on the Saudi authorities to release him immediately and unconditionally, and urge our own government to speak out on his behalf as a matter of urgency.

The decision to sentence Ashraf Fayadh to death is outrageous not only because it is vastly disproportionate to anything he may have done, not only because the death penalty is wrong in every instance, and not only because he has said in mitigation that he has done nothing that deserves death, but also because it is not a crime to hold an idea, however unpopular, nor is it a crime to express opinion peacefully. Saudi Arabia must unconditionally release Fayadh, as well as Raif Badawi and Waleed Abulkhair.

We are outraged that Fayadh’s retrial—which should have led to the absurd charges against him being dropped entirely—has instead resulted in a death sentence. We call on the Saudi authorities to cease handing down such draconian sentences for the supposed “crime” of free expression, and to release those already convicted on similar grounds.

PEN urges the Saudi authorities to desist from punishing individuals for the peaceful exercise of their right to freedom of expression. Other cases of particular concern to PEN include the liberal blogger Raif Badawi, winner of the 2015 PEN Pinter Prize for an International Writer of Courage, and his lawyer and brother-in-law Waleed Abulkhair. Badawi has been sentenced to ten years in prison and 1000 lashes, while Abulkhair is serving a 15-year prison sentence. English PEN continues to hold regular vigils for Badawi and Abulkhair outside the Saudi Embassy in London; we are also asking members of the public to pledge to protest in the event that Badawi is flogged again.

We are also calling on the British government to put pressure on the Saudi authorities to release Fayadh, Badawi, Abulkhair and others detained in violation of their right to freedom of expression. Just last month, David Cameron claimed he ‘completely disagreed with [the Saudi authorities] about their punishment routines, about the death penalty, about all those issues’. We therefore urge the Prime Minister and the Foreign Secretary Philip Hammond to raise Fayadh’s case at the earliest opportunity with the Saudi authorities and to call for his immediate release, as they successfully did in the case of Brit Karl Andree last month.

We’ll be back at the Saudi Embassy next Friday, 27 November, to continue calling for the release of Raif Badawi, Waleed Abulkhair, and now Ashraf Fayadh, Please join us