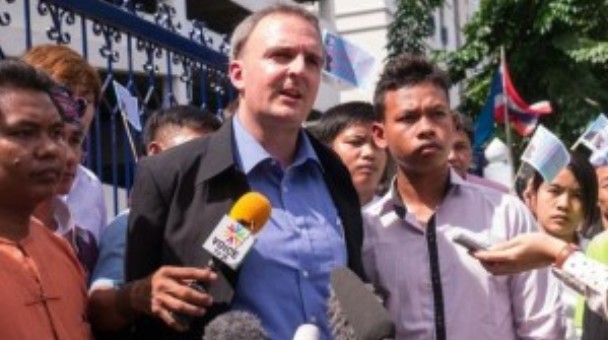 English PEN joins PEN International in calling on the Thai authorities to drop all charges against migrant rights activist Andy Hall ahead of his court hearing on 19 May 2016.

Following a Bangkok court’s 18 January decision, Hall faces charges of criminal defamation and computer crimes in connection with a report published by Finnwatch in 2013. If convicted, he could face up to seven years in prison. PEN believes that the charges against Hall are directly linked to his peaceful and legitimate work as a migrant rights advocate and calls for all charges against him to be dropped immediately and unconditionally.

We are also seriously concerned about the ongoing use of criminal defamation and computer-crime laws to gag critical voices in Thailand, and urge the authorities to amend the Criminal Code to ensure that it meets their international obligations to protect freedom of expression, including by decriminalising defamation and insult.

English PEN is also campaigning for an end criminal defamation in Europe. Read Director Jo Glanville’s Newsweek article (26 April 2016) on the prosecution of the German comedian Jan Böhmermann, and the wider problem of criminal defamation laws across Europe.

Please also send copies of your appeals to the Thai Embassy in your country. Contact details for embassies can be found here.