Skip to content
Home > Campaigns > Turkey: Charges in Sözcü case must be dropped

Turkey: Charges in Sözcü case must be dropped 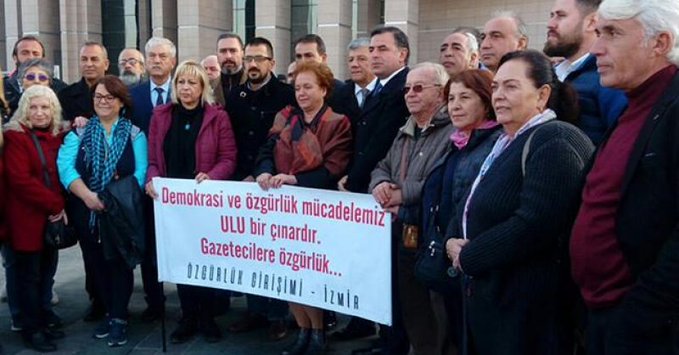 Update – 4 September 2019: The 37th High Criminal Court of Istanbul postponed the hearing to 28 October 2019. PEN International and English PEN continue to call for all charges against Sözcü daily staff and journalists to be dropped.

The 37th High Criminal Court of Istanbul postponed the hearing to 28 October 2019. PEN International and English PEN continue to call for all charges against Sözcü daily staff and journalists to be dropped.

The Turkish authorities should drop all charges against nine Sözcü daily staff and journalists who face lengthy prison sentences for news reports, English PEN and PEN International said today, ahead of an expected verdict on 4 September 2019.

The charges stem mainly from a news story entitled ‘Sözcü found Erdoğan’, published by Sözcü daily on 15 July 2016, the day of the failed coup attempt that sparked an unprecedented crackdown against perceived critics and opponents of the government. The story focused on the holiday resort in Marmaris, southwest Turkey, where President Erdoğan was spending his holiday. The resort was attacked by military personnel looking for the president on the night of the coup. Sözcü daily staff and journalists stand accused of reporting Erdoğan’s address to coup plotters, even though the location was public knowledge and the president had already left by the time the coup attempt took place.

‘Once again, journalism is on trial in Turkey. The indictment against Sözcü daily staff and journalists is ridiculously far-fetched. Accusing them of terror-related actions for publishing an article on the president’s holiday destination beggars belief. Charges must be dropped at once’ said Salil Tripathi, Chair of the Writers in Prison Committee of PEN International.

Sözcü reporter Gökmen Ulu, who penned the story, columnists Emin Çölaşan and Necati Doğru, editor-in-chief Metin Yılmaz, news coordinator Yücel Arı, online editor Mustafa Çetin, finance manager Yonca Yüceli and former website manager Mediha Olgun have all been charged with ‘knowingly and willingly aiding a terrorist organisation while not participating in the hierarchical structure’. They face between five and 10 years in prison if convicted. Owner Burak Akbay – who remains abroad – has also been charged with ‘managing an armed terrorist organisation and spreading its propaganda’, which carries up to 30 years in prison. The 37th High Criminal Court of Istanbul is expected to rule on the case on 4 September 2019.

‘Proceedings for some of the defendants have been ongoing for over two years, in what amounts to judicial harassment. It is time for the Turkish authorities to dismiss this ludicrous case and to let Sözcü daily journalists and countless others do their job without fear of reprisals’, said Cat Lucas, Writers at Risk Programme Manager at English PEN.

PEN International first spoke out in defence of Sözcü daily staff and journalists in May 2017, as Gökmen Ulu, Yonca Yüceli and Mediha Olgun were taken into custody and an arrest warrant was issued for Burak Akbay. An indictment against them was accepted by the 37th High Criminal Court of Istanbul on 6 October 2017, citing the ‘Sözcü found Erdoğan’ news story, various articles covering the 2013 corruption scandal that implicated the government of then Prime Minister Erdoğan as well as his son, and a story titled ‘Your 2016 Fortune’ as grounds for prosecution. Gökmen Ulu was released after the first hearing on 8 November 2017, having spent nearly six months in pre-trial detention.

In December 2018, similar charges were brought against Emin Çölaşan, Necati Doğru, Metin Yılmaz, Yücel Arı and Mustafa Çetin; both indictments were subsequently merged in January 2019. In April 2019, the Prosecution asked for all defendants to be found guilty – expect for Mediha Olgun, who became a government witness and was said to be able to benefit from ‘effective remorse’ provisions.

Sözcü is the largest opposition daily in circulation in Turkey and one of the last critical outlets still in print. At least 170 media outlets, including publishing houses, newspapers and magazines, news agencies, TV stations and radios, have been closed by emergency decrees since the coup attempt on charges of spreading ‘terrorist propaganda.’ At least 135 journalists and writers are currently languishing behind bars, making Turkey the biggest jailer of journalists in the world. Hundreds more are on trial.

Since the coup attempt, press cards have been cancelled as a means to stifle independent and critical viewpoints; 778 were revoked in 2016 alone.  Several international journalists have faced intimidation or have been forced to leave Turkey as their press accreditations were not renewed.  Press cards are currently issued by the Communications Directorate of the Presidency, with a new December 2018 regulation making cancellation of press cards easier, citing journalists’ criminal records.

For more information about the situation for free expression in Turkey please click here.