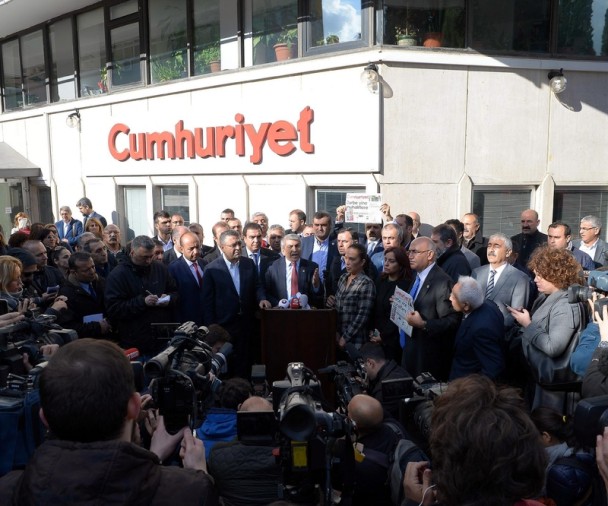 The closing of 15 more media outlets after two new statutory decrees were issued under Turkey’s state of emergency, the raid on opposition daily Cumhuriyet and subsequent detention of 14 of its senior employees is yet another nail in the coffin for freedom of expression in Turkey.

This is an unprecedented crisis for freedom of expression in Turkey. We are gravely concerned for writers, journalists, editors and publishers, who are facing baseless charges, intimidation and harassment. We would like to remind Turkey of its obligations to defend freedom of expression under international law and we condemn its ongoing mission to silence the independent media and anyone in opposition to the government.

Once again the Erdogan administration has acted with impunity and raided newspapers, closed down media outlets, and arrested journalists. Turkey’s outrageous assault on freedom of expression has continued with impunity. The world simply cannot stay silent as independent voices in Turkey are being stifled, and as it continues its march of folly towards authoritarianism.

Cumhuriyet, Turkey’s oldest daily and recipient of this year’s Right Livelihood Award, widely known as the alternative Nobel Peace Prize, was raided this morning by anti-terror police, who detained 14 staff including board members and columnists. Kadri Gürsel, the national committee Chair of the International Press Institute (IPI), who is also an international board member of the organisation was among those detained.

Since the declaration of the state of emergency, some 185 media outlets have been forcibly closed by decree while 148 journalists remain behind bars. At least 114 of these have been arrested and detained since the coup attempt.