Turkey: Dilek Dündar, wife of journalist Can Dündar, prevented from leaving the country 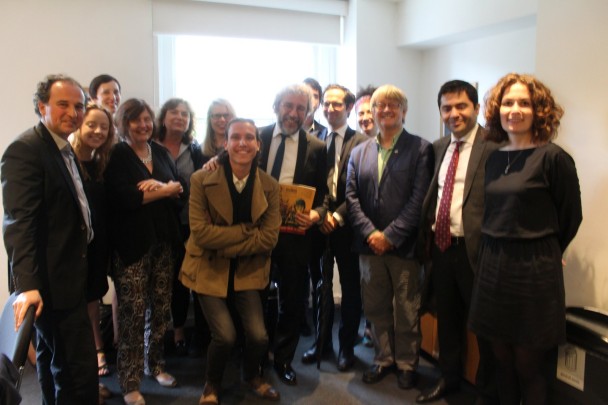 On 3 September 2016, Turkish authorities prevented Dilek Dündar, the wife of Turkish journalist and editor Can Dündar, from travelling out of Istanbul’s Atatürk Airport, confiscating her passport and banning her from travelling abroad.

This latest example perfectly encapsulates Turkey’s authoritarian rule under the state of emergency. In our new ‘judicial’ order, if one is put on trial, one’s entire family can be treated like criminals.

Dilek Dundar is married to journalist and former chief editor of the Turkish daily newspaper Cumhuriyet, Can Dündar, who was arrested along with his colleague, Erdem Gül, on November 26, 2015, on charges of disclosing state secrets, espionage, and aiding a terrorist group. The charges were in connection to the publication of video and photographic evidence in Cumhuriyet of arms deliveries by the Turkish intelligence services to Islamist groups in Syria. Dündar and Gül spent 92 days in custody before being released pending trial, on February 26, 2016. In May 2016 Dündar was sentenced to five years and 10 months in prison. He is currently out of the country.

On July 23, 2016 Turkey passed a law under its state of emergency following the attempted coup, which gave the state the right to confiscate passports of anyone under investigation and ordered the closure of thousands of private educational institutions, media organisations and publishing houses.

The decree, which immediately became law no.667 was the first such decree by the Council of Ministers headed by President Recep Tayyip Erdoğan under Turkey’s three-month state of emergency, which came into effect on July 21. On July 22, the Turkish government notified the Council of Europe that it was also ‘derogating’ the guarantees under the European Convention on Human Rights (ECHR), to which it is a party, which the Convention states a government can only do ‘in times of public emergency threatening the life of a nation.’

On 1 September an amendment to the decree came into force which extended the power to confiscate the passports not only of those under investigation, but also their spouses and partners. However, when Dilek Dündar’s passport was confiscated at the airport, she was informed that her passport had been cancelled on 4 August, almost a month before the amendment had come into effect.

This amendment extends the already draconian measures passed in the name of Turkey’s state of emergency and unnecessarily targets partners and spouses of anyone under investigation. This gives unfettered powers to restrain the free movement not only of anyone the Turkish State chooses to consider under investigation, but also their families. It is truly a dark day for Turkey when committing a crime is no longer a prerequisite to being treated as a criminal. We call on the Turkish authorities to re-instate Dilek Dündar’s travel documents and allow her to travel freely.