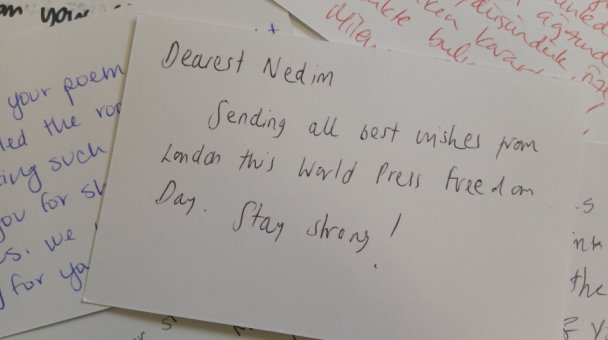 This month marks four years since the arrest of news editor, reporter and poet Nedim Türfent in Turkey on 12 May 2016. Four years later, he continues to serve a lengthy prison sentence on trumped-up terrorism charges, despite widespread concerns about his treatment in detention and the fairness of his trial. On the anniversary of his arrest, we reiterate our calls for the release of Nedim Türfent and the many other writers currently imprisoned in Turkey and at greater risk due to the ongoing COVID-19 pandemic.

Nedim Türfent is a key case of concern for English PEN and our sister centres around the world and has been the focus of global solidarity actions, including a campaign to mark last year’s World Poetry Day which saw his poem ‚ Let my heart give life‚ translated into 18 languages. In letters to PEN and our members, he often emphasises how important such support has been for him:

During this judicial struggle and the period of my incarceration you have not made me feel alone at any stage. I am so far from being alone that my voice has reached as far as Mexico and my breath (poetry) has been heard in New Zealand…

This week, as he begins his fifth year in detention, we are once again asking our members to join us in sending messages of support, and in helping to ensure that his voice continues to reach far beyond the confines of his prison cell.

SEND A MESSAGE OF SUPPORT