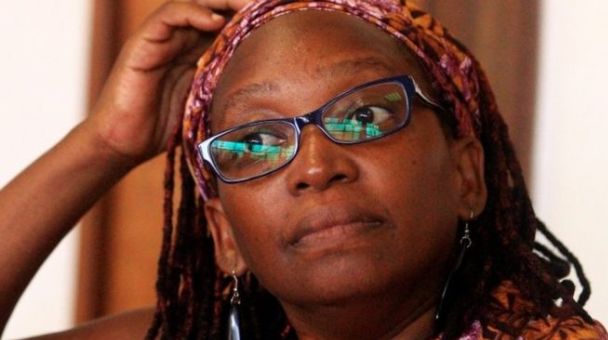 English PEN joins our colleagues at PEN International and PEN Uganda in condemning the conviction of Dr Stella Nyanzi and in calling for her immediate and unconditional release.

The conviction of Ugandan writer and academic Stella Nyanzi for comments she posted on Facebook is a sad indictment of the space for free expression in Uganda, PEN International and PEN Uganda said today. A court convicted Dr. Nyanzi on 1 August 2019, of ‚Äòcyber harassment‚Äô, but acquitted her of the charge of ‚Äòoffensive communication.‚Äô She was sentenced on 2 August to 18 months in prison. The charges relate to a poem Dr. Nyanzi wrote on Facebook criticising Uganda‚Äôs President Yoweri Museveni (and his mother). PEN believes that Stella Nyanzi is being held solely for the peaceful exercise of her right to freedom of expression and calls on the authorities to quash her sentence and release her immediately and unconditionally.

‘Stella Nyanzi has expressed herself and criticised the powers she opposes. That may shock and offend some people, but the essence of freedom of expression lies in what it means – the freedom to express – and not necessarily to please others and state only agreeable things,’ said Salil Tripathi, Chair of the Writers in Prison Committee at PEN International. ‘Freedom of expression includes the right to offend, and Ugandans have the right to express themselves as guaranteed in the Ugandan constitution and international law.’

Dr. Nyanzi was arrested on 2 November 2018 and charged with ‚Äòcyber harassment‚Äô and ‚Äòoffensive communication‚Äô under sections 24 and 25 of the Computer Misuse Act, 2011. At her first trial hearing on 9 November 2018, Dr. Nyanzi was remanded in custody and has remained there ever since, where she has suffered health problems. As she has already spent nine months in prison, she will serve out the remaining nine. She has the right to appeal. Dr. Nyanzi was previously arrested and charged with the same offences in April 2017, also in connection with Facebook posts about President Museveni.

At her sentencing hearing on 2 August 2019, which Dr. Nyanzi attended via video link, she bared her breasts in protest and lamented the fact that the ‚Äòoffensive communication‚Äô charge was dropped, saying that she wished to annoy the President.  The American Bar Association, which monitored the trial, has voiced concerns about violations of the right to prepare a defense, including the abrupt closure of the defense case by the presiding magistrate.

‘Convicting Dr. Stella Nyanzi is already having a chilling effect on the Ugandan community, as people are afraid to express themselves online,’ said Dr. Danson Kahyana, President, Ugandan PEN, and Senior Lecturer of Literature, Makerere University. ‘Many people now think that using Facebook and other social media to raise critical issues on misrule and tyranny is already a crime as proved by Nyanzi‚Äôs conviction. Even people who should know better ‚Äì some writers ‚Äì are yet to appreciate the grave implications of this judicial action.’

The United Nations Human Rights Committee, which oversees the implementation of the International Covenant on Civil and Political Rights (ICCPR), has made clear that the ‚Äòmere fact that forms of expression are considered to be insulting to a public figure is not sufficient to justify the imposition of penalties.‚Äô Human rights bodies have also pointed out that heads of state and public figures should tolerate a higher degree of criticism than ordinary citizens.

PEN International and PEN Uganda call for Dr. Nyanzi‚Äôs release and for her sentence to be overturned, and for the Computer Misuse Act (2011), which has been used to¬†clamp down¬†on dissent, to be repealed or amended to ensure full conformity with Uganda‚Äôs freedom of expression obligations under international law.

Send messages of support and books

Dr Nyanzi would welcome letters, cards and books from PEN members and supporters. If you would be interested in sending something, please email [email protected]