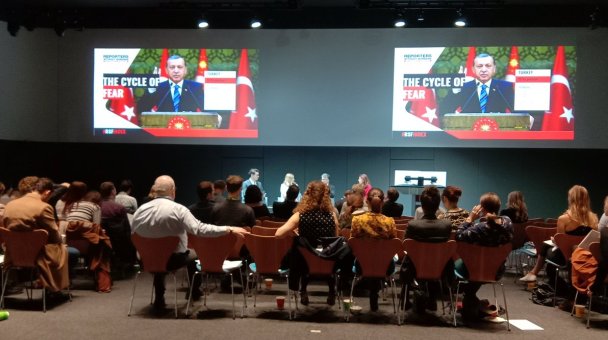 Writer-in-residence Mimi Mefo reports on the launch of the Reporters Without Borders 2019 World Press Freedom Index.

Reporters
Without Borders (RSF) have presented a bleak picture of the communication world
as media workers prepare to celebrate World Press Freedom Day on 3 May 2019.

In their latest report, the advocates of free speech identified only a handful of countries as safe for practicing journalists.

In
Africa, only four countries:  South
Africa, Lesotho, Burkina Faso, Ghana have been able earn a pass mark in the
treatment of journalists.

The favourable factors advanced so far are respect of democratic principles and power change.

Africa registered the smallest deterioration in its regional score in the 2019 Index, but also some of the biggest changes in individual country rankings. After a change of government, Ethiopia (110th) freed all of its detained journalists and secured a spectacular 40-place jump in the Index. And it was thanks to a change of government that Gambia (up 30 at 92nd) also achieved one of the biggest rises in this year’s Index.

The 2019 World Press Freedom Index compiled by RSF continued to highlight how the number of countries regarded as safe, where journalists can work in complete security, continues to decline, while authoritarian regimes continue to tighten their grip on the media.

Tanzania (down 25 at 118th) has seen unprecedented attacks on the media since John “Bulldozer” Magufuli’s installation as president in 2015. Mauritania (down 22 at 94th) also fell sharply, in large part because the blogger Mohamed Cheikh Ould Mohamed Mkhaitir is being held incommunicado though he should have been freed more than a year and a half ago, when his death sentence for apostasy was commuted to a jail term.

The continental situation of press freedom in Africa has been described as worrying. In countries like Libya, Egypt, Sudan, Eritrea, Somalia, Morocco, Central African Republic, RSF says practicing journalism is extremely dangerous as media persons are arrested, unjustly detained and even killed.   Somalia, ranked 164th, has continued to be Africa’s deadliest country for journalists according to RSF.

The World Press Freedom Index which has measured the level of global media in some 180 countries  since 2002 also placed Cameroon in the ‘difficult  situation’ category.

Cameroon was in 2018 ranked second jailer of journalists in Sub Saharan Africa after Eritrea, with at least 20 media personalities arrested and detained between 2017 to 2018.   As the global media prepares to celebrate press freedom in early May, at least five journalists are in jail despite constant calls by CPJ, RSF, Index on Censorship, PEN International, United Nations and other international organisations for the rights of reporters to be respected.

Journalist Erol Onderoglu, representative of RSF in Turkey, who was one of the panelists at the launch, pressed for more international mobilisation against press censorship.

Coming from a country described as the world’s biggest prisons for journalists, Erol said:

the organisations defending the rights of journalists need to continue mounting pressure on the governments, this can help reduce home policies towards critical media.

RSF  saluted the rise in the UK’s 2019 ranking but
raised concerns that the press freedom climate has continued to deteriorate
sharply, where steps taken in the name of national security trample on the rights
of journalists.

RSF called on UK to improve free speech and press freedom by repealing Section 40 of the Crime and Courts Act 2013, for a ‘more consistent approach to press freedom across all government bodies including the Home Office and for parliament to take a more proactive approach in ensuring that new draft legislation does not further erode press freedom’

As
the global situation of press freedom continues to deteriorate, statistics from
Reporters Without Borders state that an estimated 336 journalists remain in
jail in the world today.