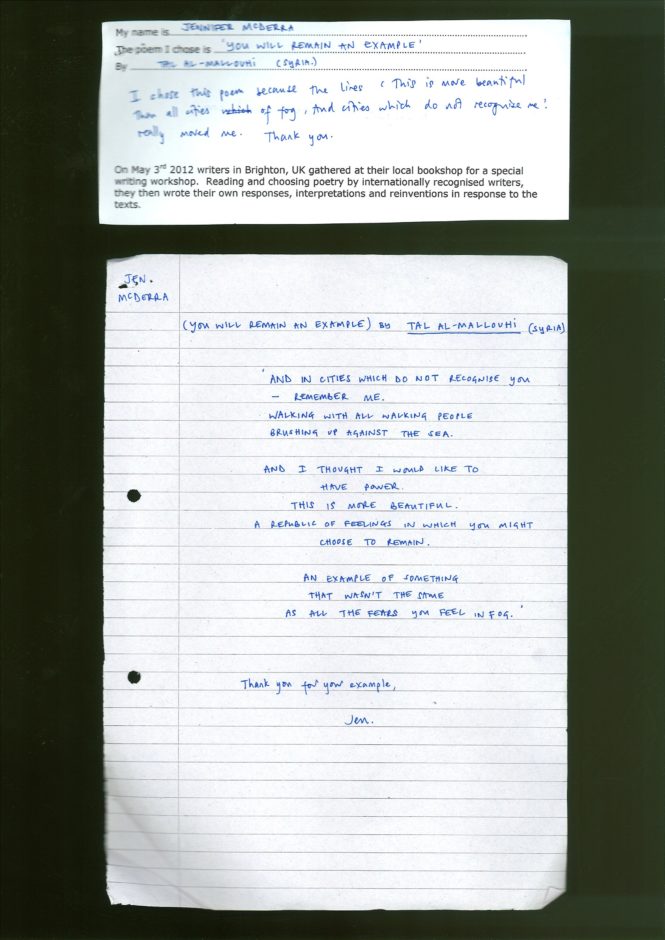 To mark World Press Freedom Day on 3 May, English PEN joined forces with Brighton-based writer and teacher Wendy Ann Greenhalgh, aka Story Scavenger, to run a very special Writers at Risk themed writing workshop. During the workshop, participants read poems by five writers of concern to PEN, before writing their own responses, interpretations and reinventions of these pieces. Their responses are being sent directly to the writers whose work inspired them, and we are featuring a selection of them on our website… This week: Tal al-Mallouhi.

Tal al-Mallouhi is a young poet and blogger who was only 19 years old when she was arrested in her home city of Homs more than two years ago, in December 2009.

In February 2011, she was sentenced to five years in prison, convicted of spying for a foreign country. The court did not disclose any evidence or details of the reason behind the verdict. Al-Mallouhi has no known political affiliations, and sources close to the family are baffled by the charges. It is widely believed that she has targeted for her online poems and writings on political and social issues.

The State Security Court’s verdict is final, and there is no possibility of appeal.

She is still in prison, with little access to her family – a situation aggravated by the recent conflict.

Here are pieces written by workshop participants Kitz Dunphy and Jennifer McDerra in response to Tal al-Mallouhi’s poem ‘You Will Remain An Example‘, translated by Ghias al-Jundi:

You Will Remain An Example

You Will Remain An Example

And in cities which do not recognise you
– remember me
Walking with all walking people
Brushing up against the sea.

And I thought I would like to
have power
This is more beautiful.
A republic of feelings in which you might
choose to remain.

An example of something
that wasn’t the same
as all the fears you feel in fog.

Write for writers at risk

Join us at the Southbank Centre on 27 June for Free the Word!, a free series of events and workshops exploring literature and freedom of expression. During the day Wendy will be running fun, half hour creative writing workshops focusing on some of PEN’s current cases of concern: visitors will have the opportunity to read poems by writers at risk around the world, and then to write their own responses or reinventions. These will then be sent directly to the writers that inspired them.

And even if you can’t make these workshops in London, you can still get involved wherever you are, as the exercise we used at the Story Scavenger workshop in Brighton is available on Wendy’s blog.