Skip to content
Home > Event > Judging a Book by its Cover

Judging a Book by its Cover 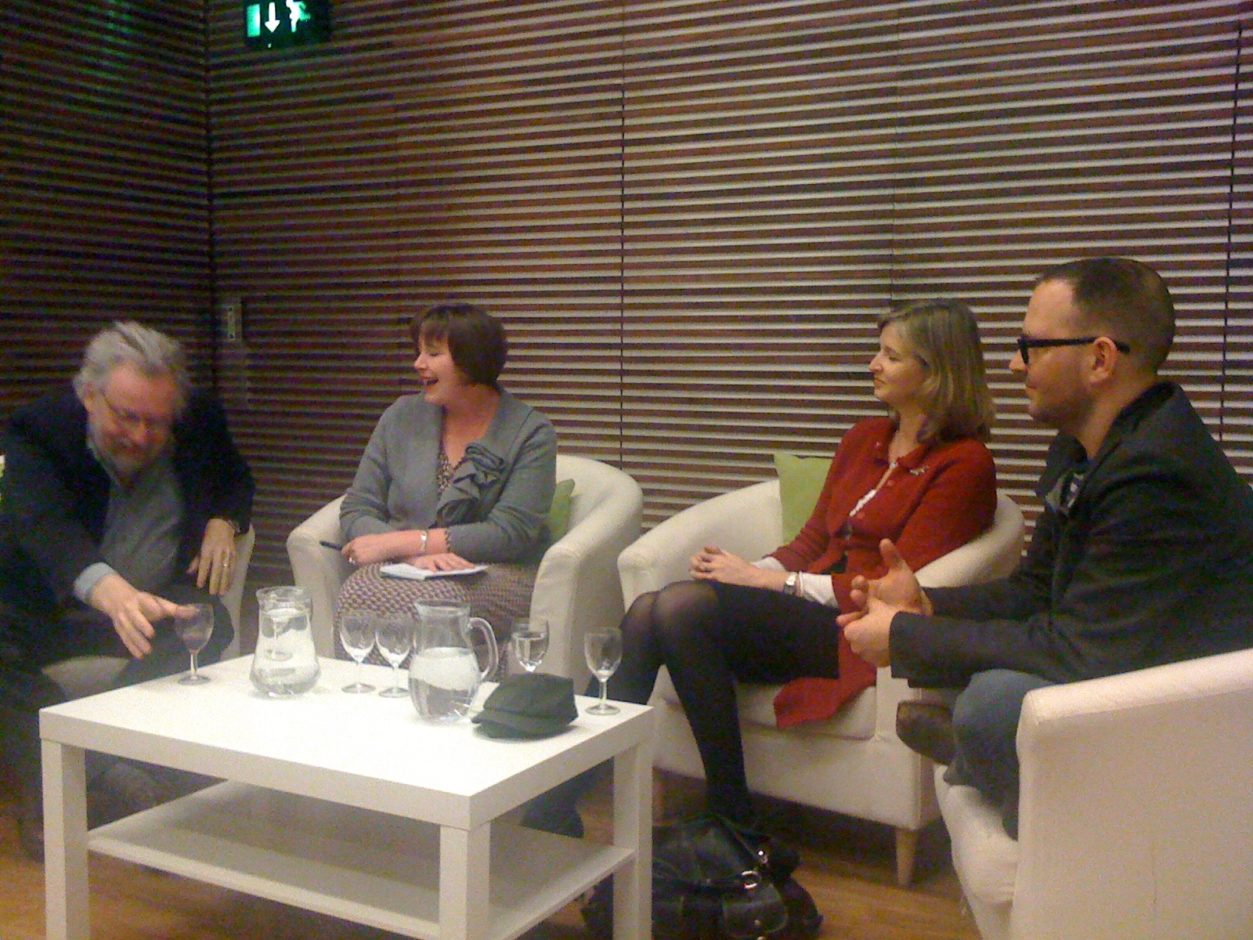 I’ll admit, I judged this event by its cover.

I assumed that an discussion titled ‘Judging a book by its cover’ would be about book jacket design, rich and fertile ground for ideas on culture and mass marketing.  I expected to hear bookseller Rick Gekoski wax about the beauty of a hardback first edition, and hear Joanna Prior explain how Penguin’s mass market paperbacks have become an iconic design in themselves.  I expected to hear how the large publishers are stifling creativity by homogenising the book design process.

And in fact, I did hear about all those things. However, I expected them to be within a discussion that was essentially about aesthetics. I did not expect to be faced, instead, with a more philosophical question: what is a book? Is it the paper, the cover and the binding? Or is it the words on the page?

I blame Cory Doctorow. Invited to give a quick run-down of his latest projects, he explained the experiments he was trying with his latest collection of stories, he explained that it would be released in several versions. You can read the free electronic PDF, or you can buy the generic paperback version. Then there is the gourmet version, which has letterpress production and includes hand bound, customised end-papers. And if you have a spare £15,000, you can buy the one-of-a-kind edition which includes an extra short-story… in which you are the star. These different strands prompt ideas of scarcity.  When the text is ubiquitous, rare versions take on extra value. In an age when books will be copied and distributed on hard-drives with increasing frequency (whatever security measures e-Book manufactures try to put in place), creating valuable versions of the books are a way of returning lost revenues to the authors and publishers. Alex Clark, from the chair, pointed out that scarcity is the basis of the rare books industry, of which Rick Gekoski is a part, and that he and Doctorow have a great deal in common. Gekoski agreed with Clark, saying that even within limited editions, the more scarce, the more demand. For example, he produces limited editions with a print run of 138. This comprises books numbered 1 to 100, A to Z, and I to XI. The twelve books with Roman numerals sell at a premium, but the numbered copies he has to give away as presents.

What’s odd about the act of making things rare or scarce is that it’s a process that removes the words and the author from the value of the object. “A particularly fine Joyce” or a version of Orlando inscribed by Virginia Woolf must necessarily have the same words as found in the paperback copies that clutter shelves in Oxfam. Perhaps fetishizing first editions and signed copies does the writer a disservice? Doctorow disagreed, pointing out that there are plenty of rare yet worthless first editions out there – the books that failed to be a success first time around. What also makes a rare book valuable is the cultural significance of the author and the text. His mission, he said, was to first make his books notorious. Only then could anyone trade off the scarcity he or others might generate (through limited editions, etc.)

Gekoski went on to say that the sheer number of books (good and bad) that are published was a source of some worry. As an undergraduate, he always assumed that one day he would become “well read”. However, with as many as half a million new books published every year, the proportion of books he has read (even as a former Booker judge) is becoming smaller all the time. He is becoming less well read by the second. While he does not wish the death of the book, he says he “wouldn’t mind it having a serious illness.”

For Joanna Prior, the issue of the number of books being published only reinforces the need for a filtering system whereby we can choose which books are worth reading. The actual cover is one way that we can make a choice and there is a role for a trusted brand such as Penguin that can act as a guide to readers. In the age of print on demand, where anyone can be an author, and the age of Amazon, where anyone can be a bookseller, readers still need some measure of quality. This allows the traditional publishing process back into the picture, as one can really only generate consistent quality through a proper system of agents, editors and series editors to ensure quality (“and critics” says Clark, the final cog in the system). The problem of funding remains, however.

Gekoski was bullish on matters of taste. His panel chose The Sea by John Banville as winner of the 2005 Booker Prize. This judgement, he says, was ultimately not a matter of taste. Those who think it’s a bad book are “simply wrong”. However, he thinks publishers can make a book better by how they package it. Recalling a first edition of The Great Gatsby he read whilst on an aeroplane, he said that there was something about the superior production values (and as a publisher himself, he has experience of the craft) which made Fitzgerald’s words richer and the story that little bit more beautiful.

After the discussion, I asked Gekoski whether Banville would still have won The Booker had The Sea been set in 8pt Comic Sans. “I hope so” was Rick’s reply, undermining his earlier point. However, I think that his earlier argument still holds true. If Banville’s book had been produced carelessly, and typeset badly, it would have undoubtedly sold less copies. Readers would have found the strain on their eyes made the experience less enjoyable, and Banville’s word-of-mouth sales would never have materialised, which in turn would have caused the book to drop off the critical and popular radar. The issue of packaging and production, epitomised by the all important cover, does have a crucial role to play after all.

Originally posted with the url: www.englishpen.org/events/reportsonrecentevents/judgingabookbyitscover/