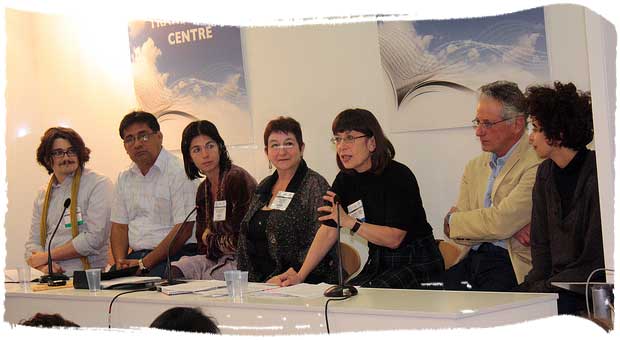 The Literary Translation Centre at the London Book Fair is a major project of our Writers in Translation programme. We are delighted to announce another diverse year of debates and discussions on all aspects of the essential and growing industry of literary translation.

How to Promote Writers

This session will discuss the entire “pipeline” of promoting translated writers–from their “discovery” in English to publicizing books before and after they are printed. How active a role can the translator play in this process? Is the process necessarily different depending on the source language?

Minority writing” takes many forms across Europe. Both the Armenians and Kurds in Turkey are part of a larger cultural group which has a homeland but also exists in a diaspora. How can the barriers to dialogue and exchange be overcome? Are writers of these two communities translated into other languages, and, importantly, into Turkish? What stands in the way of translating them into major languages likes English? And how do their experiences differ from those of immigrant writers who adopt the languages of their new countries?

Interested in a career in literary translation? The panel, consisting of prize-winning translator Esther Allen, publisher Meike Ziervogel and translator Anna Holmwood will discuss how to get started in the profession, including the importance of qualifications, networking and understanding the industry as a whole. After brief presentations, the panel will take questions from the audience.

Join Elif Shafak and Gabriel Josipovici as they reflect on judging the scores of books in translation submitted for this year’s Independent Foreign Fiction Prize, which has ‘done more for world fiction in translation than any other literary institution’ (Maureen Freely).

Have you ever wondered what goes on inside a publisher’s head…office? We ask leading editors and publishers to divulge their tastes and interests and the kind of literature they are looking out for at the moment. We’ll also get some juicy anecdotes about acquisition of certain titles and discuss unique – and perhaps unusual – working relationships that publishers have experienced with translators.

There are many cultural and regional factors that help propel books to bestseller status at home. Translators take on the responsibility of bringing these beloved stories and characters to the broadest possible audience in another language, while solving for political, social, historical, or cultural dissonance in the text and maintaining the author’s intention. In this panel discussion, a selection of English-language translators, publishers, and educators will discuss key challenges presented by bestselling texts and examples of creative solutions that helped lead to similar success in translation.

The Marketing Toolkit: How translators can make their work matter

How translators can make their work matter.

The art of literary translation is ever evolving. The ability to collaborate with authors, editors, and publishers becomes easier as the world grows smaller. This session will examine and discuss tools and methods that translators use to discover opportunities and collaborate with others to improve their skills and produce the best translations for readers all over the world.

The Free Word Centre, English PEN and Coney present an interactive journey through London Book Fair for the curious and adventurous. This is a free game that explores the ways in which translation connects people and cultures from around the world. Take part in a hunt that traverses languages, to uncover the secret links that bind us together!

There is now a growing focus on literary translation as a profession, rather than as a career that people fall into by chance. This panel discussion will question whether traditional advice for early-career translators is still valid, and will explore the increasing number of schemes and initiatives available to those keen to build their name within the industry.

Brazil – Country of the moment?

There’s an old joke that “Brazil is the country of the future, and always will be”. It would seem, however, that things have changed. In literary terms, at least, it seems to be Brazil’s moment right now.

The Tramlines iPhone application invites readers to explore European cities through short stories written as a result of exchange residencies in locations as diverse as Alexandria, Barcelona, Istanbul and Prague.  With Alexandra Büchler, Director, Literature Across Frontiers (LAF)

What is the role of literary agents in today’s world of international publishing? Are authors from outside the English-speaking territories represented in the rights-selling stakes and by whom?

In recent years we’ve seen increasing interest in new and exciting literature coming out of Asia, but much of the focus has been on writing originally in English. During this panel, we will look at what’s happening with literature written in languages other than English. Our speakers will explore the translation flows in Asia – into Asia, between various Asian countries, and out of Asia – discussing trends and key issues, as well as the role of the English language in the process.

A Common Language: Literary Translation in the US and the UK

An exclusive PEN Atlas dispatch kick-starts this discussion on the way conflict is translated and represented to us on a daily basis in the media – with a particular focus on uprisings in the Arab world.

Emerging Turkish-to-English translators Izzy Finkel and Feyza Howell will test their linguistic mettle in a light-hearted dual of words. The slam will showcase the art of translation by juxtaposing competing translations of the same piece of contemporary writing from Turkey.

Translation off the Page: The Evolving Role of Literary Translators

Free Word’s Translators in Residence programme is now in its second year. This session will bring the scheme’s four translators together to review the wider impact of the residencies, and discuss opportunities for translators in working on festivals, school workshops and games – and how this plays into the crucial question of making a living.