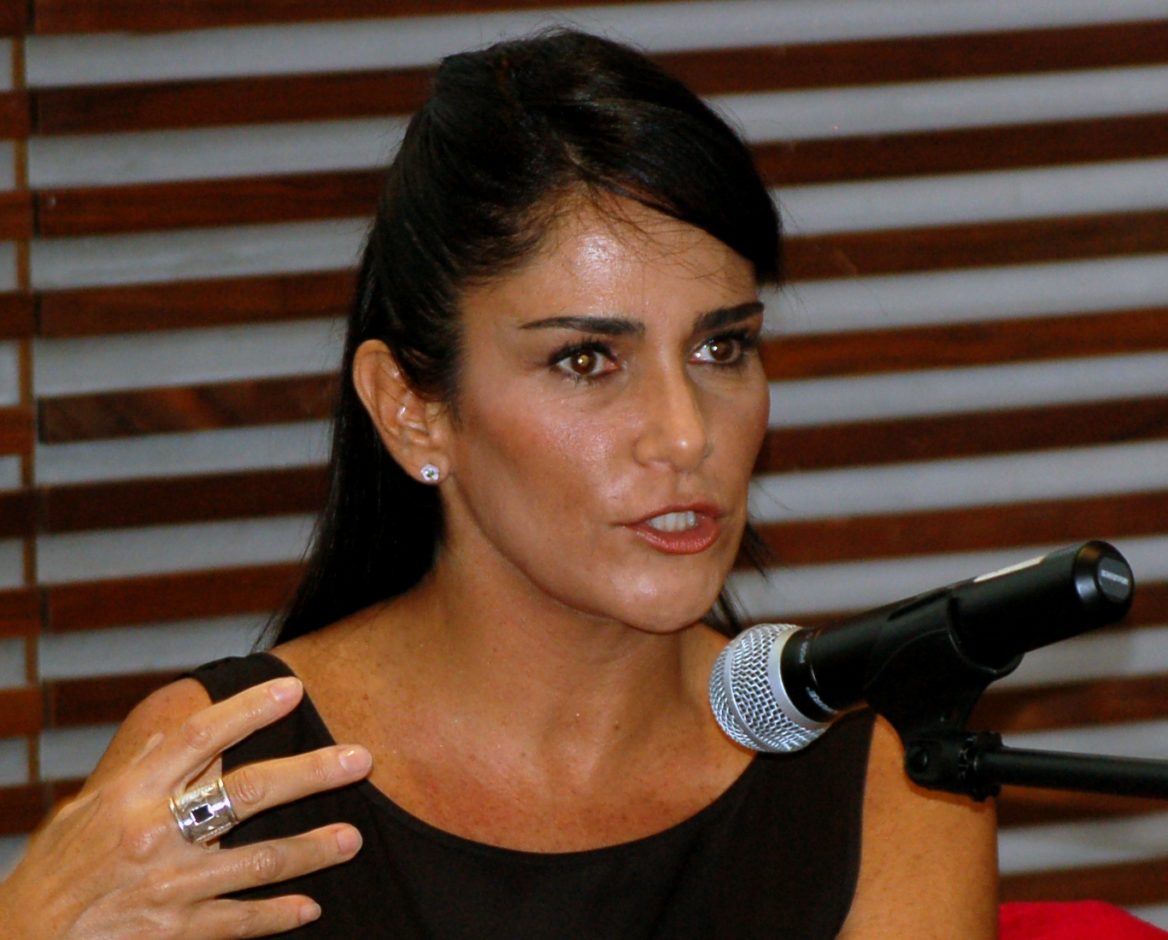 For the most important writers, literary celebrity is little more than an after-thought to communicating truths.  Discreet by nature, the people behind some of the world’s seminal voices are often, in person, identified by an almost indiscernible set of characteristics: a quiet calm, a confidence of conviction and, as Harold Pinter put it in his Nobel Literary Prize acceptance speech in 2005, “an unswerving, unflinching eye” that is cast upon the world.

In the case of investigative journalist and political fugitive Lydia Cacho however, that list of qualities must be extended to include an immense affability, beauty and an unexpected sense of humour too.

Appearing at the Free Word Centre in Farringdon last week, she spoke candidly about her initial interaction with the South American sex trade, laughing, almost, at the level of corruption involved. “I asked Mexican authorities about the connection between cartels in Mexico, the mafia bosses abroad and the international sex trade.  It was only when they told me in no uncertain terms that there was no connection that I thought: if they’re so sure that this isn’t true then it must be the case.”

It was this spark of curiosity that led to the life-threatening inquiry retold in Los Demonios del Edén (“Demons of Eden”). Since the book’s release in 2005, threats to Cacho’s life have forced her to flee her native Mexico. She came to the UK to discuss that and launch the English translation of her book Slavery Inc. published by Portobello this month.

Joining her was Helen Bamber, whose eponymous foundation rehabilitates victims of cruelty through a combination of therapy and the unique community cultivated by her dedicated team of volunteers. In its initial conception, The Helen Bamber Foundation brought in five hundred victims of war, domestic violence and sexual abuse and helped them regain a sense of stability by becoming an affiliate of its far-reaching support network. This followed decades of work that first began with the victims of Bergen-Belsen in 1945.

Bamber’s daily commitment to her patients, who on account of her award from the Order of the British Empire affectionately refer to her as “Mrs.Obie”, is perennially underpinned by the questions: “what is torture?” and “what is cruelty?” The answer to that, Cacho believes, lies with the victims. “We as journalists need to know how to interview them.” She explains, justifying her decision to dress as both a nun and a prostitute during her investigation of the international sex trade.

Cacho came to learn about the complex mechanisms that help to keep the trade illicit and therefore alive by speaking to the very people that were being exploited.

As Slavery Inc. recounts in great detail, the business of recruiting victims for trafficking can begin with manipulation of the parents, who in many cases believe they are sending their daughters on to lead better lives. Cacho relays numerous stories in which girls are recruited on seemingly professional grounds, groomed, exported and led to believe that their parents are fully aware of the treatment they are being subjected to.

In Bamber’s experience, this kind of deceit poses the greatest obstacle in helping victims regain psychological stability following exploitation or abuse. She recounts meeting a woman who had been subject to some Juju superstition and convinced that she would bleed to death. In one particularly harrowing account, she described the woman’s intense trauma at having a nose-bleed years later and believing it to be the first stage of a long and painful death.  The conundrum Bamber faced in treating her was one of instilling trust in a person who had been so deeply betrayed, her whole reality had been called into question.

Organisations like the Helen Bamber Foundation continue to strive to achieve such feats, but the cause of the problem must be addressed with equal measure, Cacho believes. It is a case of understanding the demand for sex and specifically, exploitative sex, which will enable us to counter the trade as it stands.

“No one is working with the men” Cacho claims, “and no one is telling men that their friends, brothers and sons are feeding the industry”; it is not just a problem confined to the developing world, either, she is keen to add.  As a Mexican woman, Cacho has felt the misogyny of Western men acutely. In both her experiences in disguise and from speaking to prostitutes, she effectively sums-up the attitude she encountered in the following terms:

“The fucking feminists ruined our sex lives back home, but Latin girls are much more feminine and know how to serve a man.”

It is this belief which continues to attract men to developing countries such as her own to pay upwards of three-hundred dollars for sex, of which the girls involved often see no more than two cents.

With poverty, hunger and a lack of education all perpetuating the problem, it is impossible for the victims of trafficking,  who live at the mercy of pimps and drug-dealers, to counter the problem themselves. Greater awareness is needed along with action and intervention from those outside to help alter perceptions of women and of sexuality. It is our duty to make public the criminality and cruelty in all areas of the industry.

With the contraction of the economy, both Cacho and Bamber advocate a re-evaluation of a capitalist system, which at its most basic level deals in the buying and selling of human beings.

“Property breeds corruption.” Bamber asserts, and with that unswerving eye fixed on the psychotherapist, Cacho nods in agreement.

Slavery Inc. is published by Portobello Books on the 6th of September and is available from major book shops and online book retailers for £14.99