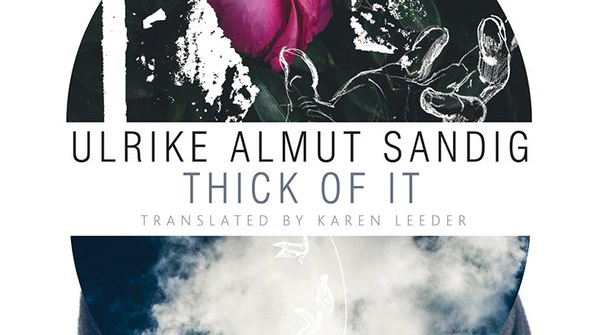 English PEN is thrilled that the 2016 winner of PEN Presents… Europe has been published by Seagull Books and is now available as a full collection in English translation. Thick of It by Ulrike Almut Sandig, translated from the German original by Karen Leeder, was one of six books that had not been acquired for English-language publication. The books were presented along with sample translations to a panel of publishing industry professionals by literary translators.

A selection of poems from Thick of It are available to read on the English PEN website, here. If you enjoy these, you can now get a copy of the whole collection from Seagull Books.

About Thick of It:

Thick of It charts a journey through two hemispheres to “the center of the world” and navigates a “thicket” that is at once the world, the psyche, and language itself. The poems explore an urgently urban reality, but that reality is interwoven with references to nightmares, the Bible, fairy tales, and nursery rhymes—all overlaid with a finely tuned longing for a disappearing world.

This is language at its most crafted and transformative, blisteringly contemporary, but with a kind of austerity, too. By turns comic, ironic, skeptical, nostalgic, these poems are also profoundly musical, exploiting multiple meanings and stretching syntax, so that the audience is constantly kept guessing, surprised by the next turn in the line.

PEN Presents… Europe was developed in partnership with EUNIC (European Union National Institutes for Culture) London and the Czech Centre.