Skip to content
Home > Members > In memory of Ronald Harwood

In memory of Ronald Harwood

While the world pays tribute to Sir Ronald Harwood, following his death in September 2020, as a gifted playwright and Oscar-winning screenwriter, at PEN we will also remember him as a friend, visionary leader, and a champion of persecuted writers.

Ronald Harwood was president of English PEN  from 1989 to 1993, then president of  PEN International  for a four-year term starting in 1993. These were eventful and significant years for PEN under Harwood’s leadership.

At his first PEN congress as international president, Harwood welcomed Salman Rushdie to the stage for a rare public appearance. The following year, he brought together Czech president Václav Havel, Arthur Miller and Tom Stoppard in an unforgettable panel at the PEN International congress in Prague. 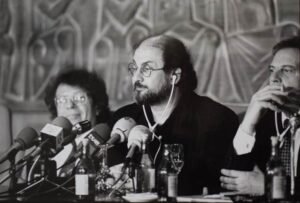 As well as championing Salman Rushdie’s case, Harwood presided over some of PEN International’s major campaigns for persecuted writers. This included advocating on behalf of Nigeria’s Ken-Saro Wiwa, Taslima Nasreen from Bangladesh and Farah Sarkoohi from Iran.

His legacy was also to strengthen the PEN movement. Under Harwood’s guidance, PEN embarked on major structural change, which led to the development and approval of new international regulations, enhanced governance and the creation of the PEN International board. This process created tensions and challenges, and Harwood’s combination of wit and humour, as well as the way in which he welcomed all voices, were essential for PEN to complete the process of reform successfully.

We are pleased to be able to share some tributes from those who knew and worked with Ronald Harwood at PEN and invite his many friends and colleagues around the world to send us your memories to include here. Please email your contributions to membership@englishpen.org

I had the pleasure of working closely with Ronald Harwood when he was President of PEN International, and I chaired PEN International’s Writers in Prison Committee. Ronnie brought intelligence, humor and discipline to the running of PEN. A director as well as a playwright among PEN’s many global, and often contradictory, voices, Ronnie determined to keep the organization and PEN’s Assembly of Delegates on a path with a deadline during the year and at PEN Congresses.

Ronnie was a superb writer and a passionate advocate for freedom of expression. When circumstances arose that required he serve an extra year as President, even though he was ready to stand down, he took the responsibility. Ironically, my successor that year also had to step aside, and I had to serve an additional year, enhanced by serving with Ronnie.

I quote from Ronnie’s acceptance speech as he took on the Presidency of International PEN at the 60th World  Congress in Santiago de Compostela, Spain in 1993:

The world seems to be fragmenting; PEN must never fragment. We have to do what we can do for our fellow-writers and for literature as a united body; otherwise we perish. And our differences are our strength: our different languages, cultures and literatures are our strength. Nothing gives me more pride than to be part of this organization when I come to a Congress and see the diversity of human beings here and know that we all have at least one thing in common. We write….We are not the United Nations.…We cannot solve the world’s problems….Each time we go beyond our remit, which is literature and language and the freedom of expression of writers, we diminish our integrity and damage our credibility….We don’t’ represent governments; we represent ourselves and our Centres. …We are here to serve writers and writing and literature, and that is enough….And let us remember and take pleasure in this: that when the words International PEN are uttered they become synonymous with the freedom from fear.

Ronald Harwood was a PEN giant.  No one else in recent memory has been President of both English PEN and International PEN.  In both roles he espoused the rights of the underdog, whether it be a writer unjustly denied free expression or a whole race refused basic human rights. He was also a past chairman of the Royal Society of Literature and President of the Royal Literary Fund. He was a friend to innumerable authors and actors, not just the most eminent such as Harold Pinter or his cousin Antony Sher, but many who were labouring far from the limelight.

I often used to reflect on the contrast between his elegant demeanour and love of the bright lights of the West End, where so many of his plays were big successes, and the quiet perseverance of his work behind the scenes on behalf of the victims of injustice. His writing was wide ranging in both subject matter and form. He had his big stage and cinema hits, most notably The Dresser and The Piano, but some of his best work is not as well known as it should be. An example is An English Tragedy, a play about John Amery, who was executed for treason in 1945, which shows Ronnie’s complex humanity at its most thoughtful and compassionate.

No mention of Ronald Harwood can be unaccompanied by a tribute to Natasha, his wife of over fifty years. He once told me that the two of them had never had a night apart from the time of their marriage in 1959 to her death in 2013.  I like to feel that they are reunited now.  Certainly Ronnie is embedded in the story of PEN, in the best of modern British and South African drama, and the affections of so many of us who knew him.

The last time I asked Ronnie how he was, he said ‘ I‘m bloody good!’ and hurried towards me on a walking stick to kiss me. His Pilates teacher was expected after tea and I joined them for the first bit of the class – until things advanced beyond my level and I left them to it.  ‘You’ll forgive me if I don’t get up’ said Ronnie, waving from the floor.

Ronald Harwood enchanted everyone. He was fun. He was also formidable. His PEN world was complex but his instinct, aided by his fastidious concentration, was always right. He was tough, physically and morally, and having served four gruelling years in turbulent times as International PEN’s President, he agreed to continue for a further year until Homero Aridjis could manage to take over.  It interrupted his writing but he said his work for PEN was more important.  I don’t think I’ve heard another writer say that.

Dear and highly respected Ronald Harwood has left us. Besides the long lasting contribution to theatre and film, experiences of unforgettable dramatic value with a dialogue you recall with a smile of recognition whenever the pictures occur in your mind, I will keep his memory close to my heart, remembering our many encounters connected to our common affection and work for PEN International.

We did not always agree about the way forward for PEN, but even when we ended up in disputes, it was a pure joy to listen to his way of arguing, and his view was always worth listening to. The overshadowing atmosphere was always marked by our commitment to our organization, and most of the time our discussions ended with one of Ronnie’s unforgettable ways of delivering an accurate and to the point humorous remark. During his years as President, he served with burning energy and long after his term was ended, he went on making highly valuable contributions to PEN. When asked, he never turned down a request for assistance.

One memory I keep with special affection is connected to the film One Day in the Life of Ivan Denisovich. It was shot at a copper mine close to the little town of Røros in Norway, where I happen to have a cabin close by. It was mid–winter and the temperatures went down to around minus 40 degrees Celsius. One snow storm followed another. Ronnie claimed this was the worst experience in his entire life, and he could simply not understand how I could survive in these surroundings. When I told him that I stayed there for months writing, he looked at me with pure horror. ‘I always thought there was something seriously wrong with you,’ he laughed. I believe the reindeer casserole and the Norwegian aquavit I served him softened his impression of being left in hell, but I am afraid this was only temporary. Never mind, this memory will always stay with me. May he rest in peace.

His presence always attuned one to the comedy of life: he was a wonderful writer and a great citizen of the theatre and literary community. A man of consummate generosity.

Ronnie was a lovely man.  He had warmth, integrity, wit and compassion, and a gift for friendship, all of which he brought to whatever he did.

Although I knew and admired his plays and other writing, I didn’t know him well until I succeeded Elizabeth Paterson on her retirement as Administrative Director in early 1997, when he and I worked very closely on the revision of the international regulations.  It was a quite difficult period lasting three or four months, and intense – but somehow it was fun, so much was it lightened by his sense of humour and wit, and his highly companionable way of working.

His vast commitment to PEN ran side by side with his writing.  At the Congress in Guadalajara in November 1996, in the unexpected absence of candidates for the office of International President, Ronnie agreed to serve a further nine months on the strict condition that a successor would be found by the time of the Edinburgh Congress.  As he said at the time, he was a working writer and needed to get back to concentrating on his writing; he had only agreed to stay in office because of his love of PEN.

In his President’s report at the opening of the Congress he wrote a powerful justification for PEN’s existence:

I have concentrated in this speech on my activities.  Let me please make it clear that in every way, these things are secondary to the great heartbeat of our organisation, which is the volume of literary, poetic and dramatic work produced by our members day in and day out…

The very reason that we are able to fight for the freedom of writers, that we concern ourselves with Linguistic Rights or with Peace or with the rights of women authors, rests entirely on our credibility as writers.  Whether our works reach a large or small public, whether they are acclaimed or damned or, worst, ignored, is irrelevant.  The very weight of our collective contribution to the culture of the civilised world is the bedrock of each and every PEN Centre individually and International PEN as a whole.  May it always be so.