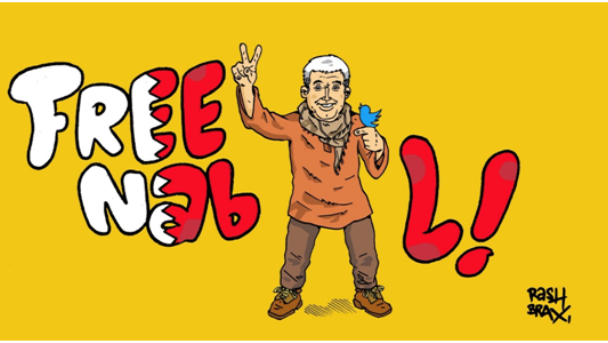 On 21 February 2018, prominent Bahraini human rights defender Nabeel Rajab was sentenced to five years in prison for tweeting about the war in Yemen and poor conditions in Bahrain’s Jaw prison. Nabeel Rajab had already been sentenced to two years in prison in a separate case for media interviews and has been imprisoned under particularly harsh conditions since his arrest on 13 June 2016.

Nabeel Rajab is the President of the Bahrain Center for Human Rights (BCHR), Founding Director of the Gulf Centre for Human Rights (GCHR), Deputy Secretary General of FIDH, and a member of the Human Rights Watch MENA Advisory Board. He has been a long-time human rights advocate in the Gulf region, giving a voice to those unable to speak for themselves. As a result of his work, he has been repeatedly subjected to physical intimidation, questionable arrests and detention, prison sentences and travel bans from Bahraini authorities.

On the occasion of the hearing on 21 February 2018, a coalition of human rights organisations including GCHR, the Observatory for the Protection of Human Rights Defenders – a partnership of FIDH and the World Organisation Against Torture (OMCT), Front Line Defenders, English PEN, and BCHR mandated a trial observation mission to Bahrain. It was carried out by a Barrister-at-Law in Ireland, who wrote this report.

During her mission, the observer met with Nabeel Rajab’s lawyer Jalila Al-Salman at her offices to discuss the case and the trial procedure, and attended the trial of Nabeel Rajab on 21 February 2018, along with international observers. This trial observation mission report looks at Nabeel Rajab’s trial process culminating with a five-year sentence on 21 February 2018, the compliance with international human rights treaties and the general human rights situation on the ground in Bahrain.

Following a second hearing on 8 May 2018, Nabeel Rajab’s appeal hearing has now been postponed until 20 May. According to our colleagues at ADHRB, at the previous appeal hearing on 23 April, the presiding judge announced that ‘Rajab is facing as many as 14 additional cases that have yet to go to court. The judge did not provide any other information, but it appears these cases could move forward at any time, and could be arbitrarily activated as further reprisal for Rajab’s activism.’

PEN remains deeply concerned by the sentences Rajab is already serving and is appalled to learn that he may face further charges.

We must keep up the pressure on the Bahraini authorities: please keep spreading the word about his incarceration and joining calls for his release. #FreeNabeel