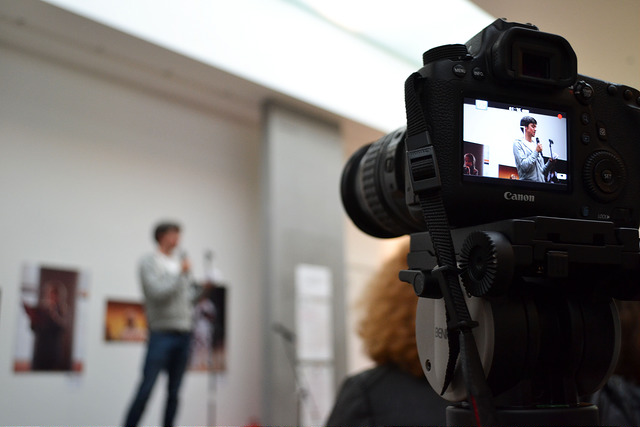 In 2015-16, English PEN’s outreach programme Readers and Writers has worked with 80 young refugees, asylum seekers and migrants on Brave New Voices, a project celebrating multilingualism and helping the young people to discover their writer’s voice through creative workshops led by poets, performers, playwrights and novelists.

In July 2016, Brave New Voices participants became published writers when Brave New Voices: a city imagined, an anthology of their poetry, stories, letters and thoughts, was published and launched at a party held at Free Word Centre on Wednesday 13 July 2016.

Here, find out about this first year of the project, read Brave New Voices: a city imagined, see poetry postcards by one group of participants, read reflections by people involved in the project and find out what we got up to at the amazing Brave New Voices party on Wednesday 13 July 2016.

With thanks to John Lyon’s Charity, the Limbourne Trust and the A B Charitable Trust for funding Brave New Voices.

In partnership with Praxis Community Projects in Bethnal Green, Migrants Organise in Ladbroke Grove and Salusbury World in Willesden, the first year of Brave New Voices has seen participants from across Greater London meeting for weekly workshops in each of the partner centres to discover new ways to imagine their pasts, presents and futures through writing.

Bidisha, Simon Mole, Zena Edwards, Femi Martin, Kat Lewis and Avaes Mohammad facilitated workshops, with support from Joshua Idehen and Olumide Popoola. In each group, facilitators led exciting creative workshops exploring all stages of the writing process and playing with language through everything from multilingual poetry to mime performance.

Each group was also visited by an international guest writer or translator: Chibundu Onuzo (the youngest ever author signed to Faber and Faber), Faïza Guène (the international YA sensation from the banlieue of Paris), Sarah Ardizzone (Translators in Schools co-founder and Faïza’s translator into English), Zodwa Nyoni (a Zimbabwe-born, Yorkshire-bred poet and playwright) and Stacie Allan, a translator with a passion for educational outreach.

In these ‘meet the writer’ workshops, the guests shared the personal (and very different!) ways they had become readers, writers and translators, read extracts from their published works, discussed their led creative exercises imagining characters and cities, and answered questions from Brave New Voices writers on things like writing authentically, what it’s like to have your work translated into another language and the tensions between writers from the Diaspora and writers from ‘home’.

All highlighted, in their own way, the power of telling stories as a way to convey your own truth – that fiction is a useful and important tool for telling the world about the reality of a situation.

Brave New Voices at the V&A Museum of Childhood

Participants from Praxis made poetry postcards for the V&A Museum of Childhood’s summer festival:

Read Brave New Voices participant Francesca Ojefua on her lifelong love of writing and how she came to write again after finding refuge in the UK.

Read Simon Mole writing about welcoming young people to the UK through literature for Brave New Voices for the PEN Atlas #RefugeesWelcome series.

In September, a piece by Kat Lewis on her experiences working on Brave New Voices at Migrants Organise will be published in Mslexia. Watch this space!

On Wednesday 13 July, Brave New Voices and members of the public from across London descended on the Free Word Centre for a night of poetry, dance, food and fun. Though established writers were on the roster, it was the young migrant poets who were the stars of the show, taking to the stage for what was for most their first ever public performances. The party launched Brave New Voices: a city imagined, a beautifully written and designed collection of new writing that is by turns hilarious, heartbreaking and an incisive call to action to change inequalities in this city and beyond.

Watch a short film of the book launch, directed by Giulia Balsamo:

See photos from the evening, taken by Holly Thicknes: 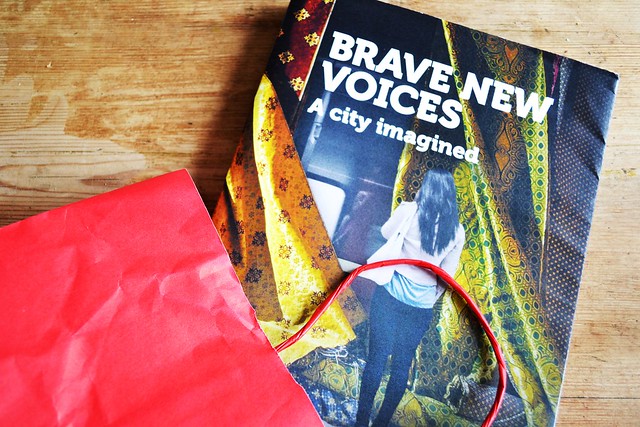