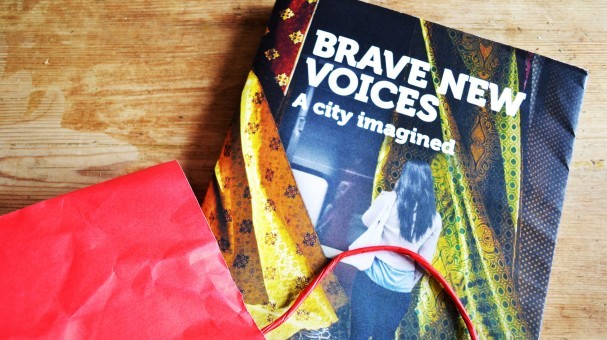 As the world faces the largest humanitarian crisis since World War II, the word ‘refugee’ has become inseparable from the disturbing images of overcrowded boats, families huddled behind barbed wire borders and the lifeless bodies of children washed up on foreign shores. Whilst these are important for drawing attention to a harrowing reality in desperate need of empathy, the scene at the Free Word Centre on Wednesday 13 July suggested the emergence of a new, positive identity beyond these photos, as migrant organisations and the public came together to celebrate the creativity of young refugees as they launched a new anthology of their own poetry and stories.

Quickly whisked away from the landscape in Mole’s own poem ‘Cycling Down the Edgware Road’, we are taken on a whirlwind tour through the young writers’ memories. These come in the form of invitations to share a nostalgic ‘yellow banana’ sun, longings for the smell of rain and ankle swingers and light up trainers, a recipe for identity (‘Don’t go easy on the madness’), advice on how to find escapism in a cheeseburger and a wonderful poem about the observations of a coat stand. The audience find themselves in details such as these, a powerful reminder of our shared humanity in spite of such huge differences in culture and experience – a theme several other poems performed on the night address.

Moving into the present and exploring a new sense of home, ‘The Sky is Watching Praxis’ paints a slice of the young poet’s personal London, hopelessness swelling eventually into a sense of pride and happiness at being accepted among the community. The confidence with which the young poets perform their work is testament to this community: whilst a poem beautifully read in Portuguese and in English translation hints at the language barriers that these young people continue to face, tonight it speaks far more loudly of the solidarity that encourages that poet to attempt to break such boundaries.

Despite the celebratory tone of the evening, however, we are reminded of the conflict between safety and loss that London represents for its young refugees. Unflinching poems about a ‘lovely grandma’ that appears in London in one poet’s dreams each night yet is markedly absent from her English bed, and the recitation of a conversation between ‘Him’ and ‘Me’ about falling pregnant too young and having to cope alone are incredibly powerful in laying bare such pain. Elsewhere, letters to the future beautifully capture the conflict between trepidation and the hope for ‘apple sunrises’, reminding us that the future can seem almost as unstable as the past for many of these young adults.

It is the increasing cheering and whooping following each performance then, that is perhaps the greatest reminder that there is something to celebrate in these experiences. Illustrative of incredible support and respect for one another’s voices, it proves powerful enough to coax even the most reluctant spoken word artists onto the stage – and it is one of these poets who sums up the feeling in the room as he turns from raw descriptions of the hate that he has witnessed to proclaim, ‘But today that defeats the purpose / Looking at all of you, I know what LOVE looks like.’

Concluding the performances on a humorous note, Simon Mole recites a poem stuck together from first lines heard on the night, (100g of beauty, eight hands and four legs – my life of cheeseburgers’), before handing the stage over to one of the refugee poets, Thirukkumaran Jeyaseelan. His performance proves to be one of the highlights of the evening – introduced as a ‘fusion dance’, Jeyaseelan’s performance is truly enchanting, a mix of styles featuring bells, flags and some beautiful contemporary Sri Lankan dancing. After that, Spice Caravan were on hand to appease rumbling stomachs with a range of delicious Middle Eastern and North African cuisine. Whilst we are invited to imagine our own worlds, prompted by signs around the room provoking us to think about such things as how we would communicate – would we need language at all? – this last task was largely drowned out by the chattering voices and laughter of the night’s young performers, socialising and celebratory selfie-taking following the raging success of their first book launch.

As people began to trickle out, a copy of the new anthology clutched in each smiling guest’s hand, it is clear that the evening has been an illustration of the innovation, creativity and talent that the voices of these young refugees possess. Having given them the opportunity to unearth it, it is clear what love, inclusion and solidarity are able to achieve in a time when we most desperately need it.

Alice Caldecott, a third-year Comparative Literature student and blogger at What’s On Africa, is part of English PEN’s volunteer team.