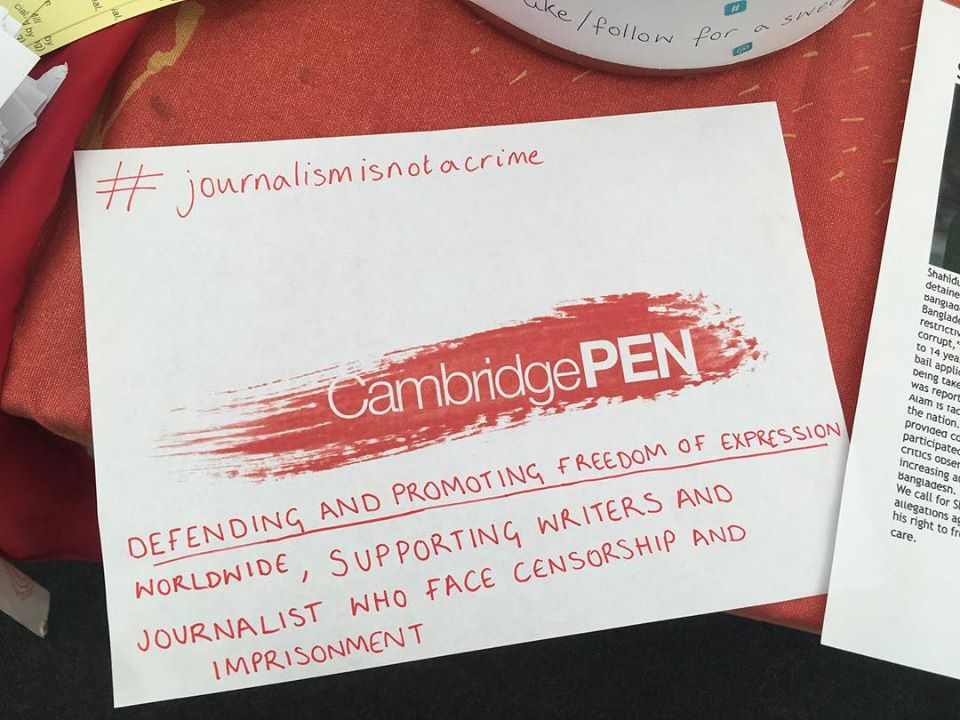 President of Cambridge PEN  Phoebe Hamilton-Jones discusses their recent events and campaigns and reflects on being part of the English PEN student network.

Cambridge Student PEN has been running for almost a decade. Its various committees have taken part in activism and letter writing campaigns and recently have worked particularly to promote the reading of texts in translation in an environment that is creative but is also culturally complacent. Within the university we are not always good at looking beyond literature in English, or even looking beyond literature from the British Isles.

In the introduction to PEN America’s translation magazine, Glossolalia, which advocates for writers who have limited access to the global reading community, the editor writes:

Too often we believe that anything worth knowing about will be delivered to us, in English, without any effort on our part.

PEN’s encouragement to read across borders and to open up our literary landscape to voices that are often sidelined intersects with the current movement within the university for a decolonised curriculum that understands how power structures inform the literature we read.

Some of our most inspiring events have centred around hearing works in their original tongue as well as in translation. Last summer at our annual PEN picnic fundraiser, students from across the globe gathered to read their favourite poems in both the original language and the translation. It was humbling to hear a such huge range of languages. A kind of humanity was produced, in reminding us of the vastness of the world, in acknowledging difference and in bringing us up sharply against a struggle to understand that too often undermines communication. Sometimes other languages are too entirely different for us to make sense of. But we found that in the effort of paying attention, of letting the rhythm of another language tumble over us, of making eye contact, reading faces, we can be brought closer.

It has been amazing to learn about experiences of multilingual identities and the politics of translation. Sönmez’s discussion of the suppression of the Kurdish language and his sorrow that his mother could never read his work was particularly resonant. As was James Womak and activist Kate Watters’ insistence on the importance of translating Batyr Berdyev’s Parting Song: Poems from Prison, as the poetry collection, smuggled out of prison, offers insight into the often unheard story of Turkmenistan’s 121 ‘disappeared’.

Among letter writing campaigns, which aim to put pressure on those in power to release, or call for the release, of imprisoned artists, activists and journalists, with the guidance of English PEN, we have sent greetings cards and messages of support to writers and journalists in prison. We tend to do this around Christmas and Valentine’s Day. Through Cambridge PEN we have also supported rallies, such as the Shut Down Yarls Wood demonstration, and have worked in collaboration with other political and NGO groups, for instance with our translation edition of the magazine Notes and by co-hosting the journalist Alev Scott with the Cambridge student branch of Amnesty International, who spoke about her work reporting in Turkey. We have run fundraiser pub quizzes and book sales. This year we have also set up an Instagram account to reach more students and alert them to the cases and stories of those that English and International PEN are campaigning for.

Each year we mark the Day of the Imprisoned Writer by readings of poetry and prose extracts from those who are or have been unjustly imprisoned. In the dimly lit upstairs room of the Maypole pub we set up chairs in a circle, with one empty chair symbolising the imprisoned writer. This year we focussed particularly on letters. We read a series of Nelson Mandela’s letters about negotiating parenting and pivotal life events – namely the death of his mother and son – from prison. We then read letters and poems by artists at risk, such as Oleg Sentsov and Dareen Tatour. The letters and poetry were frequently addressed to loved ones, but the letters also raised questions about who they are written for – for intimacy, for history, for both. In her open letter to Shahidul Alam, just before he was released on bail, Arundhati Roy wrote:

‘Am I really writing to you? Perhaps not. If I were, I wouldn’t need to say very much beyond, “Dearest Shahidul, no matter how lonely your prison cell, know that we have our eyes on you. We are looking out for you.”’

Cambridge PEN is a tiny branch of the vast and intricate network of PEN International. But through Cambridge PEN we have tried to break out of a sometimes inward-looking environment in order to promote the reading of literature in translation and provide what support we can to PEN’s invaluable advocacy and activist campaigns. It has been hugely rewarding and enjoyable to participate in the work of English PEN.