Skip to content
Home > News > In memory of Richard McKane

In memory of Richard McKane 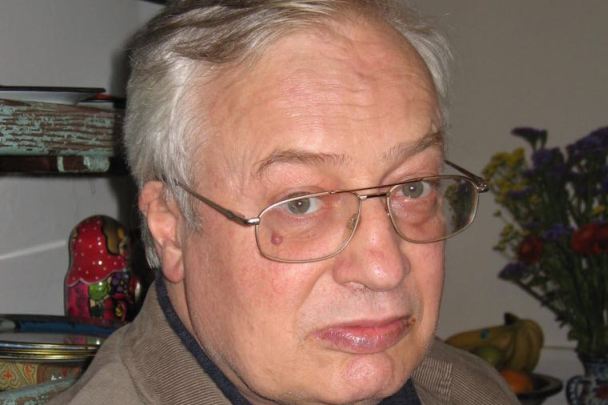 English PEN was deeply saddened by the death of the poet and translator Richard McKane, a hugely dedicated member of PEN. Here fellow PEN members and staff pay tribute to a dear friend who will be greatly missed.

I hereby stand witness to Richard McKane. I do so in the Biblical sense of the word which connotes recognition of an individual’s goodness.

“Rich”, as I always called him in awe of the opulent luminosity his life bestowed on the lives of the legions of people who met him, was my spiritual brother. He will remain so for ever.

One needed but a brief look at his eyes to ascertain that here was a special person who, despite his frailty and vulnerability, had bravely chronicled – sometimes in despair, at other times with hope and elation – the gruelling journey life imposes on everybody. I believe Rich embodied one of those “little Christs” that, as Mauriac infers, shoulder sufferance like Isaiah’s “Suffering Servant”. A “little Christ” – not so little in Rich’s case – who defies evil and endeavours to defeat it with all the felicity that life also provides.

Yes, Rich had the gift to embrace felicity. His abandoned laughter in convivial gatherings, his wonderment at the beauty that is everywhere around us, his hoorays when his work – both literary and humanitarian – bore heart-warming results, and, above all, his great love for his daughter, Juliet, his brother Christopher, and their respective families, are proofs of that gift.

In universal terms, it was Rich’s stoic endurance of suffering – his own and those of others – twinned with his Ethical Self’s conviction that dignity, peace, and the pursuit of happiness are humankind’s birth rights that made him not only an accomplished poet but also the English voice of some of the greatest poets of our times.

I once wrote that Rich, while possessing a soul that is the envy of many poets, also had three other equally enviable souls. How else, I posited, could he fathom the innermost reaches of the Russian dolour and  élan vital in the works of Pushkin, Gumilyov, Akhmatova, Pasternak, Mandelstam, Aranzon et al, and then move on to explore the equally depthless yearnings of the Turkish psyche in the works of Hikmet, Dağlarca, Rıfat, Yücel and others? Moreover, as if all those splendours were not sufficient, how else could he further endow us with offerings from Uzbek, Azeri, Czech, Swedish and Greek masters?

Some Turkish writers addressed him as babayiğit – literally paladin-father – in recognition of his unbounded love for family, friends, compeers, and humankind. And it was his urgency to transport this endless love to a better world that drove him to English PEN and, particularly, to its Writers in Prison Committee. And there he toiled to prompt social conscience to dispense care to those needy as well as to a planet which rapacious imperia are destroying with impunity. I can attest that his work in defence of universal human rights, his campaigns against abuses of power, his advocacy of freedom of expression in every artistic discipline, remains legendary both in English PEN and in many other PEN Centres.

An ancient belief to which I adhere declares that “Death is a lie”, that when our souls leave this world, they go to other worlds which, in Kabbalistic cognition, are in need of “repairs” just like ours. The belief is akin to Dylan Thomas’ immortal phrase, “death shall have no dominion”. Simply put, it reassures us that in every ending there is a beginning.

And that means, dearest Rich, you are now at a new beginning. I can envision you, cocooned in eternal light, inspire with love, fortitude and adamantine determination the inhabitants of another troubled blue dot in the Universe to repair their world as you have inspired us to repair ours.

So Farewell, my brave lovely brother. All your loved ones, all who revere you as a role model – including myself – will meet you again. Sometime. Somewhere. In another dimension.

Richard McKane had a great and gentle soul. He is a poet, a translator of international renown, in both Russian and Turkish, and was a campaigner for freedom expression and victims of torture. Richard had a brilliant mind, and his translations, for instance of Akhmatova, Mandelstam and Hikmet, are outstanding. He was a great translator because as well as a brilliant mind he had a huge heart full of love and empathy. We became friends when I was on the English PEN Writers in Prison committee. He was a wonderful vice chair who inspired us with his commitment and collaborative spirit. He campaigned for  Asiye Guzel’s release from prison, translated her account of her ordeal as a political prisoner in Turkey, Asiye’s Story, and worked with Mai Ghoussoub at Saqi Books, who published it in 2003. He also worked with victims of torture for over eighteen years as an interpreter from, and into, Turkish and Russian at the Medical Foundation for the Care of Victims of Torture. He felt the pain of others’ so keenly, and always showed such courage in the face of his own. He was a very lovely friend,so kind, intelligent and sensitive. The world is a darker place without his shining presence.

Helen Chadwick, composer and singer, pays tribute to the poet who introduced her to the work and worlds of so many others:

I have set many poems that Richard translated for which I am deeply grateful. He introduced to me to new worlds, new poets I had never heard of, new landscapes which fitted so well with my own love of the work of poet survivors. Those poems have been introduced to others through the songs and so his line continues when we sing. He was always kind encouraging and generous.

I was greatly saddened to hear of Richard’s death.

I worked with him for many years on the Writers in Prison Committee and he was a tireless campaigner, a great support and a good friend. He had a huge heart and I found Richard to be one of the most humane people I have ever met. I learned a lot from him and he introduced many of us on the committee to Helen Bamber and the work of the then Medical Foundation (now Freedom from Torture) where he also volunteered. He was great fun to be with, erudite and a wonderful poet and translator. I know that he will be much missed by many of us in the PEN world and beyond.

Ekaterina Turchaninova of Russian PEN on Richard’s contribution to mutual understanding between countries:

The death of Richard McKane is a great loss. Russian PEN-center mourns with you. I didn’t have the occasion to be personally acquainted with Richard, but I heard a lot of enthusiastic words about him from the Director General of the Russian PEN Alexander Tkachenko. Richard translated his poetry and helped to arrange his readings in London. After Tkachenko’s death I have been corresponding with Richard for several years, and it was a great pleasure to read his kind, sympathetic and very interesting emails. He was a great friend of the Russian PEN center. His contribution to mutual understanding between our countries is very important, he translated into English many Russian poets, from Mandelstam and Gumilyov to modern poets, members of the Russian PEN Larissa Miller and Olga Sedakova. Eternal memory!

I knew the poet, translator and interpreter Richard McKane slightly through what was then called the Writers in Prison Committee of English PEN, and found him friendly to everybody and deeply concerned about political prisoners. He also did a lot of work for Freedom from Torture (previously the Medical Foundation for the Care of Victims of Torture). He spoke two languages which were of great assistance – Russian, which he had studied at university and Turkish, which I believe he acquired first-hand when he lived in Turkey for several years. He helped many people.

If you would like to send a tribute or memory to be included, please email [email protected] Please also join Richard’s friends and family for his funeral at 11am on Friday 7 October at St Bride’s Church, Fleet Street, and the reception that follows. All friends are warmly welcome.

In lieu of flowers, please consider making a donation in his memory on JustGiving.