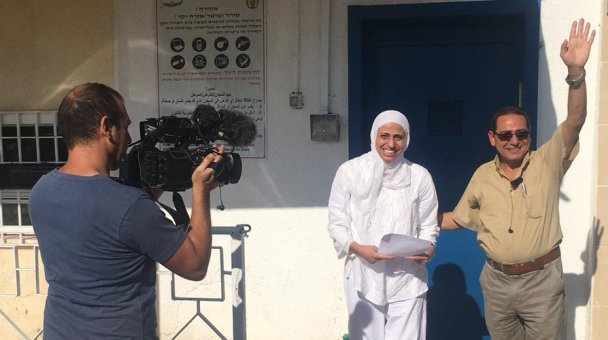 English PEN warmly welcomes the news that poet Dareen Tatour was released from prison in Israel on  20 September 2018.

Dareen Tatour, a Palestinian poet and citizen of Israel, has spent almost three years in jail or under house arrest since October 2015. Tatour’s conviction is related to a video in which she recites one of her poems entitled: ‘Qawim ya sha’abi, qawimhum (Resist, my people, resist them).’

In May 2018, Tatour was convicted of incitement to violence and support for terror organisations. In July, she was handed a five-month prison sentence, with six months suspended, which could be activated if she is convicted of any new offence. As she had already served three months in prison, she was only required to serve a further two months.

On 8 August 2018, Tatour entered the special wing of Damoun Prison as she was classified as a ‘security’ prisoner. As a result of this classification, Tatour was denied access to her phone and the internet, as well as restrictions on receiving clothes from outside. Despite regulations allowing visits from relatives, Tatour’s father was denied permission to visit his daughter, reportedly receiving a response which stated ‘She does not deserve a visit.’ He and Dareen’s mother were finally allowed to visit her on 5 September, after almost a month in prison.

Upon her release, Tatour commented:

After three years of suffering, imprisonment & house arrest, I finally feel happy. I have gained my freedom and I will continue to write. All my suffering was due to a poem I wrote and it saddens me that they (Israeli authorities) imprisoned me for writing the poem.

PEN has been supporting Tatour for several years and considers that she was targeted for peacefully exercising her right to free expression through poetry and activism. We are hugely grateful to everyone who has taken action on her behalf and sent her messages of support during this time.

If you would like to send a message welcoming her release, please do so via cat@englishpen.org.