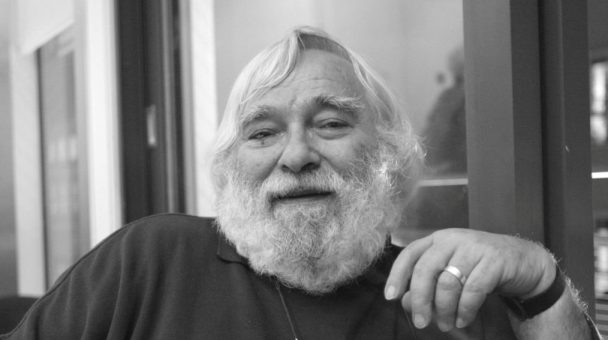 Moris Farhi (always called Musa) began for us back in 1981 as a great-hearted man, intellectual and writer who was one of our dearest friends, someone to laugh with and eat with and feel safe with, whose imagination and thinking were always global and generous. My husband Nick Rankin is also a writer; we read Musa’s books, he read ours, and we printed off our just-finished manuscripts on his massive photocopier, always with a bottle of champagne. Both his passion to protect others from harm, seen in his work for PEN Writers in Prison Committee, and his inexhaustible desire to make people happy, may have sprung from tragedy, the death of nearly all his mother’s Jewish family in the Nazi death-camps. He, Nina and stepdaughter daughter Rachel, and after Nina’s death his beloved partner Elaine Freed, were family to us, and Musa and Nina were loving godparents to our daughter Rosa. Later he became the writer who single-handedly saved my career by taking my much-rejected novel The White Family to his friend and publisher Mai Ghoussoub at Saqi, who loved it and became my publisher too.  His novels were epic in scope and global in range; he anticipated 9/11 in a novel called The Last of Days, written, astonishingly, in 1983.  The excluded and marginal of the world, from the Roma to Andean Indians, were the heroes of his work.  At the end of his life, despite great happiness living by the sea with Elaine and writing the novel which will be published after his death, he felt keenly the danger of resurgent antisemitism in Europe, and wanted his friends to take it seriously.

I wrote the following poem in celebration of his 70th birthday in 2005.   The epigraph, and many of the names in it, are taken from what to me is Moris Farhi’s finest novel, Young Turk (Saqi 2004), a series of interlinked narratives written partly in homage to the great city he had loved and left, and to record its losses. In her Guardian review Maureen Freely said his ‘evocation of the Istanbul of his erased youth is a triumph of imaginative memory, on a par with WG Sebald’s The Emigrants. Faithful to its splendid roots, generous and forgiving, it restores the city to the little people who made it great.’ Musa really did love us all, seeing greatness in littleness and enlarging the world with the compassion that softened his tragic vision of human life.

He left the world he knew when he was young,
watching the marvellous city shrink and darken.
Stone in his heart, he went because he must.
Sailing the endless gulf from east to west
he found the one he loved before he met her:
quicksilver Nina, and a bright-eyed daughter.
Home, he is home. Yet there are aches and losses.
City of dreaming childhood, full of faces
fallen like rose-petals across the night.
Nearly too late, Young Turk, you called them back,
tunnelling through the long forgetfulness.

Here they come, single, shy, into the day,
stumbling from the suburbs of disuse ,
the cemeteries, the stained and broken streets,
sharpening into life against the light.
Death has surrendered them, and, shivering,
they edge the beaten metal of the river,
steadying now. Not to be lost again.
They know each other, are each other. Glad.
And then we hear: stories, laughter, summer.

So begin,  begin again, the luminous blue days.
Here’s Gül, her pain
no, not forgotten, but gone somewhere else,
and look,
Suna’s hair burns red-gold, safe in the book,
and Osman flies to Adem on strong wings,
and Musa holds them both, the Peacock Twins.
See how they dance, his loves, to the kanun
his young man’s zither with its seventy strings.
The children listen, spellbound.
And he sings.

(This poem was first published as a Menard Press MenCard, in 2005.)

Read other tributes to Moris from friends and colleagues around the world and please do send us yours via cat@englishpen.org