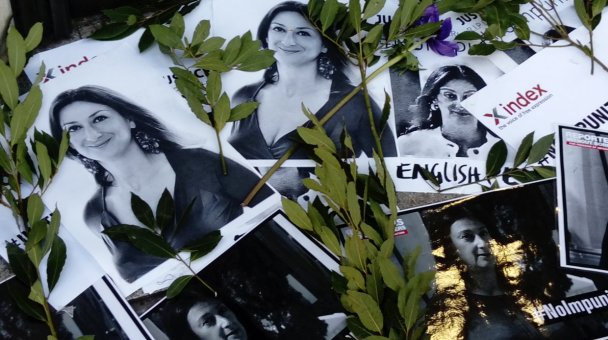 Leading writers from Europe and around the world have written to the European Commission today, on the six-month anniversary of the brutal assassination of Daphne Caruana Galizia, Malta’s foremost investigative journalist, expressing their grave concern regarding developments in the investigation into her assassination and ongoing reprisals against her family and sources.

Over 250 influential writers, publishers and PEN members including PEN Pinter Prize winners Margaret Atwood and Salman Rushdie, our President Philippe Sands and Chair of Trustees Maureen Freely, are calling on the European Commission to ensure justice for Daphne Caruana Galizia, and for the protection of journalists and whistleblowers in Malta.

Read the full letter and add your support here

European culture and values are our best protection against hatred and oppression. And Daphne fought for these values until she no longer could. Her death has left hundreds of thousands voiceless, while the state-appointed leader of a European cultural event in Malta slanders Daphne’s legacy and ridicules people’s calls for justice. We hope—and it’s clear this is a hope shared by many in Europe—that the European Commission will help fill the vacuum Daphne left and remind the Maltese government that there are lines such as this that must never be crossed.

In particular, the letter raises profound concerns regarding allegations of shameful behavior of the management of Valletta 2018, the European Capital of Culture, in relation to her case. This programme is overseen by the European Commission’s Creative Europe.

The assassination of Daphne Caruana Galizia was ordered in direct response to her journalistic work in exposing rampant government corruption at the heart of the EU. Since her death, the Maltese authorities have not attempted to investigate the crimes she uncovered and appear deeply reluctant to seek justice for her killing.

The open letter also restates PEN’s broader fears relating to the ongoing investigation by the Maltese authorities into the assassination of Daphne Caruana Galizia, which we believe does not meet the standards of independence, impartiality and effectiveness required under international human rights law.

Even after her assassination, senior government officials, including the Prime Minister, Joseph Muscat, are insisting on trying thirty-four libel cases against her, which have now been assumed by her family. In addition to these cases, the Prime Minister is taking a further libel case against Caruana Galizia’s son, Matthew Caruana Galizia, himself a Pulitzer-Prize-winning journalist. PEN believes that these proceedings are in direct reprisal for his mother’s work in investigating corruption within the current Maltese government. The Prime Minister is currently compelling Matthew to return to Malta to stand trial, despite independent security experts advising him to remain outside Malta due to substantial threats to his life there.

On 16 April, we will be holding a vigil at Malta House in London to mark six months since Daphne Caruana Galizia’s murder and to continue calls for justice. The vigil is co-sponsored by English PEN, Reporters Without Borders (RSF), Committee to Protect Journalists (CPJ), Index on Censorship, Il-Kenniesa, PEN International and ARTICLE 19.