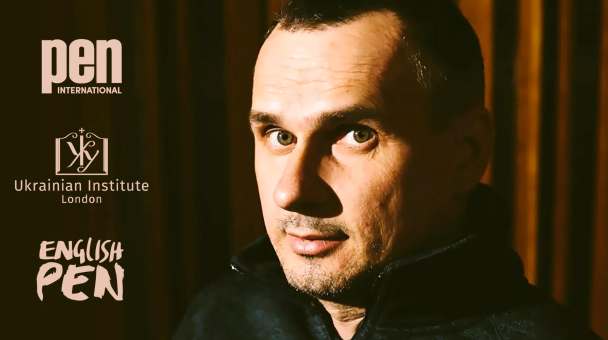 Ukrainian writer and filmmaker Oleg Sentsov was sentenced to 20 years in prison on spurious terrorism charges after a grossly unfair trial by a Russian military court, marred by allegations of torture. He was detained for more than five years, before finally being released as part of a prisoner exchange between Russia and Ukraine on 7 September 2019.

Following his arrest, PEN centres around the world came together to support Oleg Sentsov, including on last year’s Day of the Imprisoned Writer. Here in the UK, we actively campaigned for Sentsov’s release – including hosting a vigil outside the Embassy of Russia in London, publishing his short stories in translation thanks to Dr Uilleam Blacker, and highlighting his case at the English PEN Modern Literature Festival through performances by fellow writer Steven J Fowler. PEN members including Sir Tom Stoppard wrote to him in detention, and translator Sasha Dugdale helped to connect us with Russian speakers to help translate these letters into Russian.

We are delighted to be joining our colleagues at PEN International to welcome Oleg Sentsov to the UK in November 2019. In this exclusive event, Oleg Sentsov will be in conversation with Natalia Koliada and David Lan about life as a filmmaker, director and writer, and his hopes for the future.

The discussion will be followed by the screening of the acclaimed documentary by Askold Kurov, The Trial: The State of Russia vs Oleg Sentsov.

Every ticket holder will receive a signed copy of Oleg Sentov’s new book: Life Went on Anyway: Stories – with special thanks to Deep Vellum Publishing.

David Lan is a writer, producer and social anthropologist. He was writer in residence at the Royal Court 1995 to 1997 and artistic director of the Young Vic 2000 to 2018. He is currently Theatre Associate at BAM in New York. His memoir ‘As if by Chance: Journeys, Theatres, Lives’ will be published by Faber and Faber in early 2020.