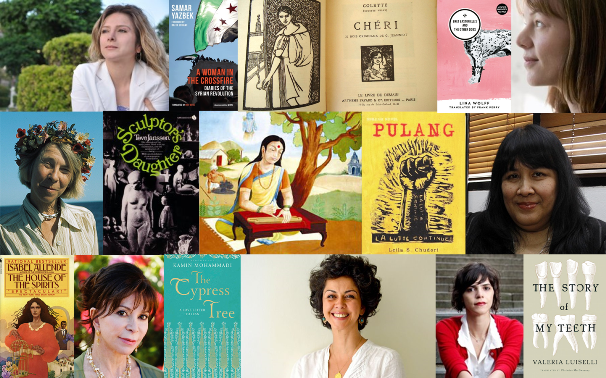 “If we are celebrating women writers in translation I think Anna Akhmatova is one of the most deserving. She lived through terrible times and never lost her humanity, in fact she seems fired in the crucible of history. Her poetry in translation is beautiful, haunting and strangely modern. She is rare in that she is regarded as one of the finest Russian poets rather than being unjustly overlooked as so many other women writers are and have been. I’ve loved her poetry since I first found in as a student of poetry in the 1980s.”

“My favourite book in translation by a woman writer is The Story of My Teeth by wonderful Valeria Luiselli!”

“The book I choose to be my favourite one – a quite difficult question – is Death in Spring, by the Catalan author Mercè Rodoreda. It is quite surprising that you have the English version and here in Spain it is unavailable!

The novel is one of the strangest books I have ever read — I would say her style, in this case, is a strange mixture between Herta Müller, Aglaja Veteranyi and Unica Zürn’s prose: absolutely wonderful and absolutely compelling! I heartily recommend it :)”

“My favourite book in translation by a woman writer is A Woman in the Crossfire by Samar Yazbek.

In the summers of 2009 and 2010, I volunteered with a friend in Lebanon, running a summer school for children in a small village in the Chouf mountains. At the end of the summer school, in 2010, we travelled into Syria and spent a wonderful few weeks there. During our stay, we hitch-hiked to the Deir Mar Musa monastery in the desert and spent an amazing few days there and made four fantastic friends (two were Syrian Christians from Aleppo and two were Italians). Ever since then, Syria has managed to lodge itself in my heart and it is devastating to hear about the destruction that is still going on there. Our Syrian friends have both fled Aleppo and are trying to make new lives for themselves in Europe

I heard Samar talk about her book in the summer of 2013 and her testimony of the first 100 days of the Syrian Revolution was utterly compelling. The account she provides in the book is brutally honest: she never glosses over the suffering of the people she writes about and she is vocal in her opposition to the regime. She manages to capture the struggle of a nation in intensely personal and poetic language. I admire Samar for her courage and for the fact that she says that she could never be “the kind of woman who could just calmly go on living while such shameful acts crash down on people all around [me]”.”

“My favourite book in translation by a woman writer is The House of the Spirits by Isabel Allende. It’s a great novel, with historical details, made by a skillful writer.”

“My favourite book by women writers in translation is Extracting the Stone of Madness: Poems 1962 – 1972 by Alejandra Pizarnik.”

“My fave book by woman in translation at the moment would be The Days of Abandonment by Elena Ferrante — vicious and visceral and eye-opening.”

“There aren’t really any translations of my favourite Ukrainian women’s authors such as Lina Kostenko — but I do tend to like East European literature anyway so would pick Fat Like the Sun by Anna Swir and Cheerleader for a Funeral by Nina Cassian.

I saw Nina Cassian back in the 90s and she was terrific — the poetry of both writers has that simplicity and directness of much writing from that area, but a focus on smaller things — telling little details — the sound of dust falling on furniture, how someone you love looks glimpsed from behind in the street.

Found this Cassian poem online, and here is Disappointed and Happy by Swir (images lower on page).

“My favourite book in translation is Elena Ferrante‘s My Brilliant Friend. I resisted reading it for a long time, as I was afraid that all the praise I’ve been hearing about it would ruin the experience, but the book more than delivers. The moment I finished it, I ordered a copy for my best friend and called my parents to evangelise them immediately . The novel is also a great fit for the IWD, as it doesn’t just tell a story of a female friendship (a feel-good phrase that sounds too much like a chick-lit blurb), but it is actually about the price of survival in a male-dominated society.”

“My choice would be The Farewell Angel by Carmen Martin Gaite, translated by Margaret Jull Costa.

The cliff top house, with the wind, weather and childhood reminiscences are lightly done and all the more evocative for that.

Thank you so much for running this competition, and making me think for a minute. Will be sure to take The Farewell Angel from the shelf when I get home.”

“Maybe it’s the recency effect, because I just finished this book, or maybe it’s because it’s so powerful — at any rate, my entry is The Door by Magda Szabo. I read Len Rix’s translation, published by NYRB Classics.

I am so grateful that this book was translated into English. Thank you for running this contest! I’ll be looking at the other entries to add titles to my ‘must-read’ list.”

“I’m going to go with Bret Easton Ellis and the Other Dogs by Lina Wolff (transl. Frank Perry) – which I notice is in the pic used in your article – such a brilliant novel!”

“I feel like the best translated book is Samar Yazbek‘s The Crossing: My Journey to the Shattered Heart of Syria.”

“My favourite book in translation by a woman writer is Cheri by Colette.”

“My entry for the IWD giveaway is Atukuri Molla, the Indian poet who translated the Indian epic Ramayana from Sanskrit to Telugu.”

“Irmgard Keun‘s Child of All Nations, which was unbelievably only translated into English a few years ago by Michael Hofmann. It feels like it should be a classic school text: as a Jewish writer who had to go into exile, it’s a fascinating portrayal of displacement and lack of agency that’s just as relevant today, and powerful in its perspective from a child.”

“My favourite book in translation by a woman is A Woman in Berlin (Eine Frau in Berlin), an anonymous memoir of a woman journalist living in Berlin during its capture by the Soviets. An incredibly powerful (and fairly harrowing) account.

The author allowed it to be published on condition of her anonymity, but its publication in 1959 was met with such hostility in Germany that the author refused to have it republished. At the same time, it was published in another seven languages around the world and, in the early 2000s, it was rereleased again in its original language in Germany – to wide critical acclaim. Something of a publishing journey, and a long wait for recognition.”

“My favourite is The Faster I Walk The Smaller I Am by Kjersti Skomsvold, translated from Norwegian by Kerri Pierce. Appropriately for IWD the main character is also a woman, in this case an older woman (another underrepresented group in literature) and her attempts to overcome a lifetime of being overlooked. I love it for its subtle quirkiness and for offering a different perspective on ordinary life.”