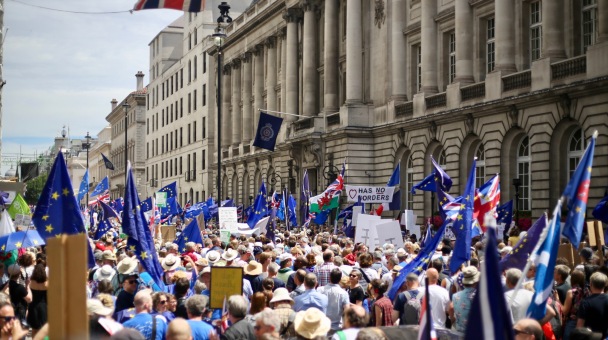 On 23 March, PEN’s writer-in-residence Mimi Mefo attended the ‘Put it to the People’ march in London. Here, Mimi reports on her experiences of attending the march, and the contrast with protests in her native Cameroon

The government of Cameroon is reputed for suppressing dissenting voices, irrespective of gender or agenda.

After the recent presidential elections, the opposition has been more determined than ever before to rise against electoral hold up, decrying fraud and irregularities.

Supporters and leaders of the Cameroon Renaissance Movement, who claimed victory in the presidential elections 7 October 2018, have been arrested, brutalised and shot for taking to the streets to air their concerns.

Over one hundred and sixty members of the party are currently in jail including Professor Maurice Kamto, President of the party.

Britain, on the other hand, has a contrary picture.

Though trapped in the controversial Brexit negotiations, it remains a model of democracy when it comes to the rights of protesters and their views being respected.

Covering the highly attended People’s Vote march on 23 March was a  fascinating experience of a rather different political terrain, where police presence went almost unnoticed.

This would be a different scenario in Cameroon if such mobilisation was to take place…..