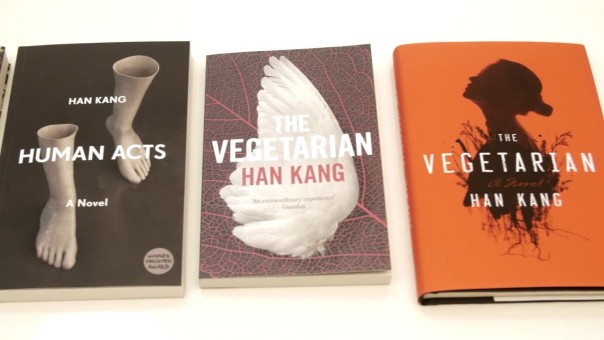 July’s Book Club was a little different from usual. Some months ago, Boyd Tonkin, chair of this year’s Man Booker International Prize panel, had agreed to join us to talk about whichever book was chosen as the winner in May. The winner turned out to be Han Kang’s The Vegetarian – which we had already discussed in the second ever Book Club meeting last September, when we were joined by its translator Deborah Smith. We decided to cover all the bases by discussing this book again as well as Human Acts, Han Kang’s latest novel to be published in English (again translated by Deborah), which came out earlier this year with the support of two English PEN grants.

Boyd was as open about the judging process as discretion allowed, revealing among other things that Human Acts had been seriously considered for the longlist. We’ve often debated how much we might be missing by only reading the English-language versions of books, so it was fascinating to discover that one contender was eliminated because a judge fluent in the source language had also read the original and felt that a number of idioms had been inaccurately conveyed.

One of the most satisfying things about The Vegetarian winning the prize, for those who promote translated literature, is how distinctly different from almost all western literature the book is, offering curious readers access to something quite unfamiliar. But there were suggestions of writers who might perhaps offer a bridge: Angela Carter, Marguerite Duras, Deborah Levy, David Mitchell and Sjón were some names mentioned in our meeting.

Although The Vegetarian – click here for details of our September discussion – and Human Acts appear to be very different books, we concluded that both address the clash between old and new ways of thinking: the increasing emancipation of women in the former and the throwing off of the the yoke of totalitarianism in the latter. The Vegetarian was preferred by a majority, but Human Acts certainly made a huge impression on most of us.

In Human Acts, the chapter narrated by the boy’s ghost provoked varied reactions. We were aware that, like that of many Far Eastern countries, the culture of Korea is rich in references to ghosts and that these seem to embody rather different ideas to the spectral hauntings of Western spooks. For some, this meant that the chapter was a little lost in translation, but others found that a ghost with such personality really got under their skin.

While the real-life horror of the violently suppressed student uprising was enlightening for most of us, described with details that will remain long in the memory, our discussion did keep returning to The Vegetarian. Because of this, perhaps the least surprising revelation of the night from Boyd was that it was the unanimous choice to win of the Man Booker International Prize panel.