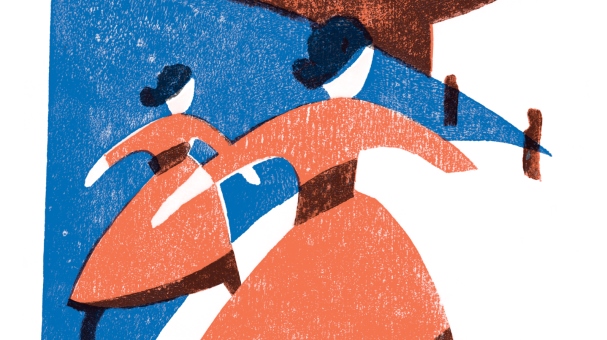 At October’s Book Club, the title under discussion was PEN Translates award-winning The Winterlings by Cristina Sánchez-Andrade, translated from Spanish by Samuel Rutter. The evening also featured our final guests of 2016, the author herself and Henry Rosenbloom, the founder of the book’s publisher Scribe (whose list this year is a full half translated literature, we were delighted to hear!).

The Winterlings is Cristina’s ninth novel, but her first to be published in English. Henry first heard about the book from Cristina’s Spanish agent and, in a very rare move, bought the book unseen on the basis of Samuel Rutter’s enthusiastic recommendation.

Both author and publisher had nothing but praise for the translator. This was his first book-length translation project, but he already finds himself so busy that he’s unable to find time to take on further work for Scribe! He and Cristina worked closely together – she is also a translator, from English to Spanish – and the only difficulties in the process came with specifically Galician words or phrases. Caldo, a traditional Galician vegetable soup, was one example highlighted.

The title itself required some care. The Spanish title – Las Inviernas – is simply a feminine plural of the word for ‘winter’. ‘Winterling’ was hit upon as a neat portmanteau of ‘winter’ and ‘sibling’, although Cristina did remind us that there is no explanation for the nickname in the book, as indeed the sisters whose story the book tells observe.

Long before writing Las Inviernas, Cristina had penned the many tales told to her by her grandmother, but hadn’t found a way to present them to readers – until this book. The man who ran 40 miles a day believing himself to be a bus and the elderly woman daily given the last rites for years were both such stories.

The book itself came about when Cristina passed a sign to the village of Las Inviernas in central Spain and the image of the two sisters, amid rain typical of Galicia, came unbidden to her. In fact, the story, at least in terms of its basic outline, wrote itself to a great extent, explained Cristina. Even she did not know until well into writing the book what the sisters’ dark secret would be, let alone that a frozen octopus would be involved. Cristina did observe, however, that this was the best plotted of her books and credits starting to teach creative writing as the main factor in her development of narrative techniques.

The transvestite dentist Tenderlove was inspired by the ‘dentist mechanic’ Cristina’s father used to visit, fearing the attentions of real dentists. Looking for gold teeth in the mouths of corpses was, upsettingly, based on the reality of life for the poor during the Civil War.

The War was not something Cristina necessarily intended to write about, but the tale needed to be set during the 1950s to accommodate the entirely true story of Ava Gardner coming to a Spanish village at that time to film Pandora and the Flying Dutchman, when local villagers did indeed audition to be her body double. The revelation of the whole village’s involvement in Don Reinaldo’s fate reflected the ways that many ordinary folk found themselves forced to inform on friends and family simply to stay alive.

The Book Club is very grateful to both Cristina and Henry for their generous sharing of insights into the writing and publishing of the book. As with all our previous guest speakers, they added to our understanding and enjoyment of the book immeasurably. And The Winterlings certainly gets a hearty thumbs-up from the English PEN Translated Literature Book Club.

Read ‘How I wrote The Winterlings‘, Cristina Sánchez-Andrade’s essay for PEN Atlas.