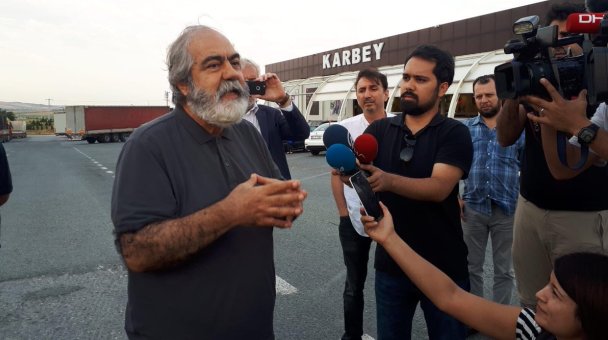 In June 2018, four months after being sentenced to life in prison without parole and after almost two years in prison, writer and academic Mehmet Altan was finally released pending appeal. PEN has been calling for his release and that of his brother Ahmet Altan, a leading novelist and journalist, since they were first detained on 10 September 2016. We have hosted protests at the Embassy of Turkey in London and, more recently, at Downing Street to mark President Erdogan’s visit to London, while hundreds of writers and artists including PEN Pinter winners Margaret Atwood, Lydia Cacho, David Hare, Hanif Kureishi and Roberto Saviano added their voices to a statement in support of the brothers.

Shortly before his release, our President Philippe Sands was the first foreigner to be allowed to visit Mehmet and Ahmet Altan in prison, because he represents the brothers at the European Court of Human Rights in Strasbourg. Writing for the Financial Times after the visit, Sands commented:

Mehmet is perplexed by his situation and the prospect of spending the rest of his life in prison. A life sentence is ‘like living without clocks, in endless time’.

We are so glad that he has been released and were honoured to interview him about his reaction to the news, his recent experiences, and how best to support his imprisoned brother and other writers in prison in Turkey.

We were so relieved to learn of your release last week. Were you expecting it?

Victimised by a rather heavy situation of lawlessness I was held in prison for nearly two years. I believed that once the law began stirring again that my victimisation would be somewhat resolved. Still, waking up from a nap to the joyous screams of my cellmates and finding out from the TV news that I was to be released was a huge surprise.

How aware of the support of PEN and other international organisations while you were in prison?

PEN and other international organisations relentlessly keep working for democracy and freedoms. I am grateful to you and to all of them. As I always say, thank goodness for the world and for humanity. While in prison, I was kept informed (by my lawyers) about these activities outside and that boosted my morale and energy. I hereby would like to thank you once again.

How can we best support writers still behind bars in Turkey, including your brother Ahmet?

The implementation of the universal rules of law in Turkey will bring freedom to imprisoned journalists as well as putting an end to all other forms of injustice. It might perhaps be helpful if the legal status of each incarcerated journalist would be examined and publicisedby looking into his/her specific case file. A permanent solution can be achieved through concrete legal regulations that will prevent arbitrary linkages between terrorism and media activities.

While we warmly welcome the news of Mehmet Altan’s release, his conviction and life sentence have not been quashed and he remains subject to a travel ban. He and his co-defendants is due to appear at an appeals hearing on 21 September. We also remain concerned for his brother Ahmet and the many other writers still behind bars in Turkey.  We will continue to do whatever we can to highlight their cases, to introduce their work to new audiences, and to continue calls for their immediate and unconditional release.