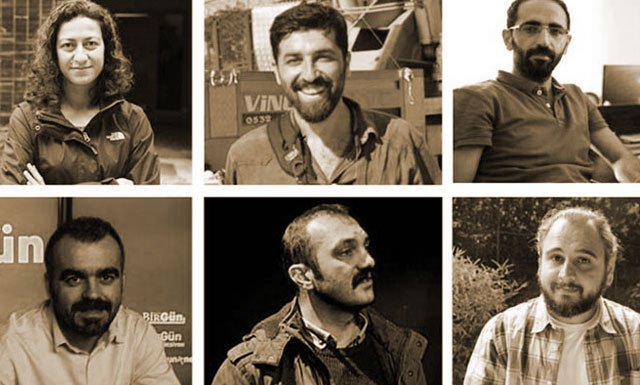 In Sepember 2016, Berat Albayrak, President Erdoğan’s son-in-law and Minister of Treasury and Finance, had his private email account hacked by the group RedHack. Among other things, the emails leaked, dating back to a period when he wasn’t involved in politics, included correspondence with pro-government journalists and politicians as well as regarding business dealings.

The journalists were all detained in December 2016. Yoksun, Okatan and Sezgin were released 24 days later. Çelik was released in October 2017, and reported having experienced physical abuse in detention, while Kanaat and Öğreten were released following their December 2017 hearing, having spent 323 days in pre-trial detention.

The latest trial in the civil case against all six journalists took place on 13 September 2018 at Istanbul’s Çağlayan Court House.

Evidence against the group includes their published articles on the subject and private WhatsApp groups discussing the leaked emails. Previous defence by the journalists notes that the emails were published on WikiLeaks and so were publicly available before they reported on them; they had also been reported on by other agencies that have not faced on trial. Crucially, the emails were of public interest. Kanaat had also previously stated that he never wrote an article on the subject and is ‘being tried for news reports that don’t exist’. No sentence has yet been brought against these defendants.

I have attended every trial and will attend every trial until I am acquitted. I’m a journalist, I can’t travel. I demand removal of my overseas ban.

They also called for technology items that were confiscated when the defendants were initially taken into custody to be returned.

The trial was observed by reporters from NBC, and representatives of English PEN, P24 and Reporters Without Borders, and Fatih Polat, editor-in-chief at Evrensel newspaper.

All requests for acquittal of the six journalists and the return of their computer and phones were rejected, with the judge stating that ‘the expert review had not been completed’. The next hearing is expected to take place on 8 January, 2019 where the two journalists who were not present, Yoksu and Çelik, will be forcibly brought before the court.