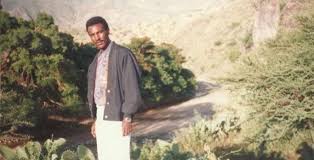 In the valley of fear and peace Something resounded.

Extract from 'The Scourge of War' translated by Tedros Abraham

Award-winning Eritrean poet, songwriter, critic and editor-in-chief of the leading newspaper ዘመን (Zemen, The Times) Amanuel Asrat was arrested at his home on the morning of 23 September 2001 amid a crackdown on state and private media. Nineteen years later, it is believed that he continues to be held without charge or trial.

Amanuel Asrat is credited for the Eritrean poetry resurgence of the early 2000s. Along with two friends, he created a literary club called ቍርሲ ቀዳም ኣብ ጠዓሞት (Saturday’s Supper) in 2001. This club set a precedent for the emergence of similar literary clubs in all major Eritrean towns. Asrat is also a well-known poet and songwriter. His writings dealt with subjects ranging from the daily life of the underprivileged, to war and peace. His work provided a negative insight towards conflict, an uncommon approach among popular Eritrean wartime poetry.

His award-winning poem ኣበሳ ኲናት (The Scourge of War)* alluded to the then ongoing border dispute with neighbouring Ethiopia, describing the blood shed by two brothers. In the summer of 1999, the poem was awarded a prize by the National Holidays Coordinating Committee, run by the People’s Front for Democracy and Justice. The prize given is regarded as one of the most prestigious in Eritrea in terms of literary and artistic awards. The committee outlined the uniqueness of Asrat’s poem for standing sharply against war.

The ugliness of the thing of war
When its spring comes
When its ravaging echoes knock at your door
It is then that the scourge of war brews doom
But…
You serve it willy-nilly
Unwillingly you keep it company
Still, for it to mute how hard you pray!

Asrat’s newspaper ዘመን (Zemen, meaning The Times) became the leading literary newspaper in the country, run by a circle of critics who helped shape the cultural landscape. Asrat himself was one of the most popular art critics of his time.

In July 2001, the Eritrean government embarked upon a campaign to silence its critics, arresting opposition politicians, students and many journalists. As part of this crackdown, Amanuel Asrat was arrested on 23 September 2001, alongside the editors of all privately-owned newspapers. He has been held incommunicado ever since.

The situation of Asrat and his fellow writers remains unclear. It is unknown whether charges have been brought against them or if they have ever been brought to trial. They are believed to have been subjected to torture and other ill-treatment, including lack of access to medical care.

A joint submission to the United Nations from PEN and the Committee to Protect Journalists outlines the response from the authorities to international bodies and NGOs:

Over the years, the authorities have either denied that a clampdown took place, claiming instead that the journalists have merely been sent to carry out their national service, or that the closures and mass arrests were necessary for the sake of national unity or were carried out because of the newspapers’ failure to comply with laws covering media licenses.

The authorities have not replied to repeated enquiries made by the UN Special Rapporteur on Eritrea on the whereabouts, state of health and access to medical treatment of the journalists and politicians arrested in September 2001, or why they have not yet been brought before an independent court to be charged with a crime recognised under international law. In response to 2017 enquiries from CPJ, authorities similarly refused to comment on specific cases or provide substantive information on the whereabouts, legal status and health of imprisoned journalists.

The authorities have made several claims in the media, for example in a June 2016 interview with Radio France Internationale (RFI) in which the Foreign Minister of Eritrea claimed that all of the journalists and politicians arrested in 2001 are alive, though without providing any proof. In the same interview, the Foreign Minister said that these men would be tried ‘when the government decides’.

However, despite these claims, the authorities have not provided any proof or confirmation of the whereabouts of the writers and politicians.

Almost two decades on from his arrest, Amanuel Asrat is believed to be among the few surviving journalists arrested in 2001, detained in the purpose-built maximum-security prison Eiraeiro, in a remote location north of Asmara.