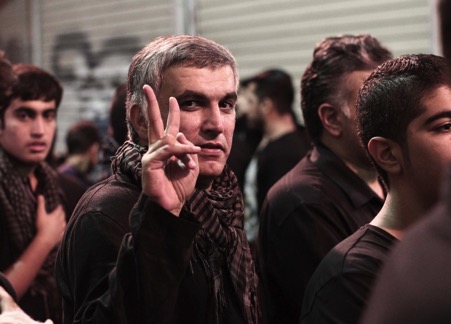 English PEN joins PEN International in calling on the Government of Bahrain to drop all charges against prominent activist and internationally recognised human rights defender Nabeel Rajab. We believe that his most recent arrest, in response to his speaking out about an outbreak of violence at Central Prison in Bahrain, is yet another attempt to suppress his legitimate right to freedom of expression.

PEN calls for the immediate and unconditional release of Nabeel Rajab, and of all those currently detained in the Kingdom of Bahrain solely for the peaceful exercise of their right to free expression.

On 2 April 2015, Nabeel Rajab, President of the Bahrain Centre for Human Rights (BCHR) was arrested at his home in Beni Jamra, Manama, Bahrain. His house was surrounded by about 20 police cars and a number of security forces participated in his arrest. He was presented with a warrant charging him with spreading false news. Rajab’s arrest is believed to be linked to a recent piece Into Bahrain’s Jaws of Hell, published by the Huffington Post, in which he exposed ill-treatment and collective punishment in Bahrain’s Central Prison, also known as Jaw Prison. On 10 March, a protest broke out at Jaw Prison over the treatment of the prison inmates, which provoked a brutal response by the security forces. Rajab documented and reported the consequences of the authorities’ response on that day.

Soon after his arrest, Nabeel Rajab was remanded by the Public Prosecutor on charges of ‘insulting a statutory body’, and ‘spreading rumours during war time’.  This second charge against Rajab is a result of his documentation of deaths of civilians in Yemen, during Saudi-led coalition airstrikes in late March 2015. Bahrain participated in the coalition by sending a number of fighter jets against Houthi forces in Yemen. At the time, the Bahraini Ministry of Interior warned against any criticism in this action and stated that the authorities would take ‘appropriate steps against individuals that put safety and security of the country at risk’.

Furthermore, Nabeel Rajab remains on trial in relation to a tweet he posted in September 2014, for which he could face up to six months in prison. Following numerous delays, his appeal was scheduled to take place on 15 April, but instead went ahead on 5 April. It has now been delayed until 4 May.