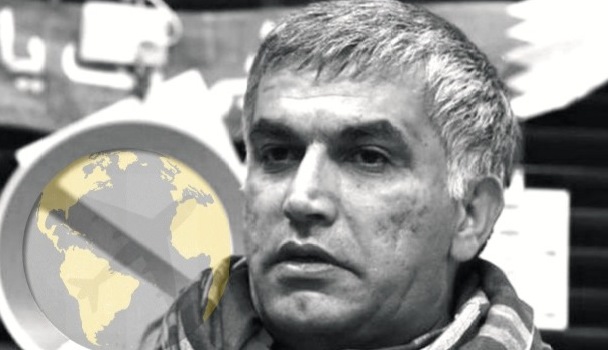 The Bahraini authorities must disclose the grounds for the arrest of leading human rights defender, Nabeel Rajab, and cease its campaign of intimidation and harassment of dissidents.

On the opening day of the 32nd Session of the United Nations Human Rights Council, the Bahraini authorities have once again demonstrated that they will not tolerate dissent as their insidious clampdown on anyone brave enough to criticise the regime continues. This is not the first time that Nabeel Rajab has been arrested simply for exercising his right to free expression. The international community must stand with those who risk so much to speak out and wholeheartedly condemn this systematic suppression of free speech.

Police forces arrested Rajab during a dawn raid at his home in the village of Bani Jamra earlier today. During the raid, the police are reported to have confiscated all of Rajab’s electronic devices. The police did not provide a reason for his arrest, according to reports.

Nabeel Rajab, is a leading human rights defender, writer and President of the Bahrain Centre for Human Rights (BCHR), Founding Director of the Gulf Centre for Human Rights, Deputy Secretary General of the International Federation for Human Rights and on the Advisory Committee of Human Rights Watch’s Middle East Division, is no stranger to Bahraini prisons. In July 2015, he was released from prison following a royal pardon; he had spent three months in solitary confinement. Between 2012 and 2014, Rajab spent two years in prison for taking part in ‘illegal gatherings’. He was released in May 2014.

PEN has been working on Rajab’s case since his arrest in 2012. In November 2015, PEN signed on to a letter issued a letter to King Shaikh Hamad bin Isa Al-Khalifa demanding the lift of Rajab’s travel ban and to drop all his charges, signed by 80 members of the European Parliament and international organisations.