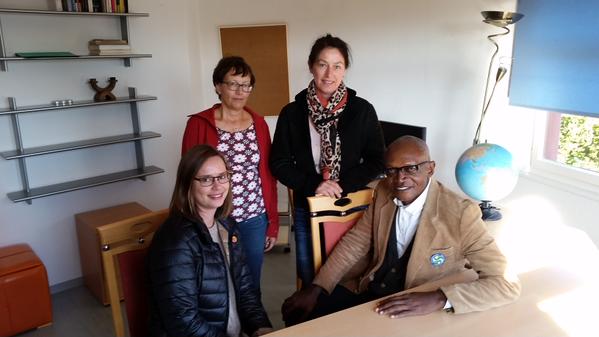 This week, PEN colleagues from around the world are in Quebec for the 81st PEN International Congress. Today, an email from the writer Enoh Meyomesse, the focus of a major English PEN campaign, was read to delegates:

I want to tell you all that I’m immensely grateful for all you did for me. I received hundreds of letters and they continued to flow when I was no longer in prison. It changed the way the prison director saw me. All of a sudden I wasn’t abandoned anymore, I became a VIP. Not an important person but an important prisoner throughout the world. I also received copies of the letters to the Prime Minister and Minister of Justice. Let me reveal, thanks to the letters, the government expedited my release, as they did not want to be perceived in a bad way by international opinion. By releasing me, it showed people that a writer is not a useless individual but a character important to the whole world.

Earlier this month, we learned that Enoh has now arrived in Germany where he will be spending a year with our colleagues at German PEN. We also received footage from an interview with Enoh, filmed by Cameroonian artist Issa Nyaphanga, in which he again thanked PEN for their support:

We hope to invite Enoh to the UK to give a talk and meet his many supporters very soon. Watch this space…