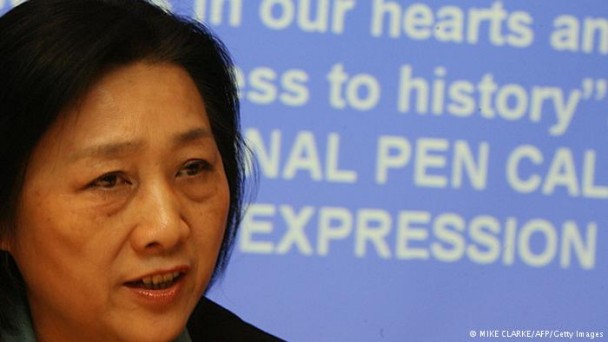 PEN is deeply disappointed by the Beijing high court’s decision not to overturn veteran journalist Gao Yu’s conviction for ‘leaking state secrets abroad’ on 16 November 2015. Following a closed hearing held on 24 November, the court ruled to reduce her sentence from seven to five years.

Nonetheless, PEN welcomes the news that Gao Yu is due to serve the remainder of her sentence under house arrest due to concerns for her deteriorating health. We strongly urge the Chinese authorities to ensure that Gao Yu is afforded adequate medical care, and continue to call for her conviction and sentence to be overturned.

Send appeals to the Chinese authorities:

According to PEN International’s information, Beijing-based veteran dissident journalist Gao Yu was convicted of ‘leaking state secrets abroad’ and sentenced to seven years in prison on 17 April 2015. During her trial, which began behind closed doors on 21 November 2014 only the prosecutors, Gao’s lawyers, the judges and court staff and a few court police were present owing to the nature of the charges laid against her (please see previous actions for more information).

Gao Yu’s appeal – expected to take place in July – was delayed for unknown reasons. Reports suggest that the Chinese authorities asked her to dismiss her lawyers, however she refused. The authorities are also said to have been attempting to persuade Gao Yu to plead guilty on a lesser charge, which she has also refused. He appeal hearing was finally held at Beijing’s high court on 24 November 2015, behind closed doors. Despite the presentation of evidence that Gao Yu had not provided the document to the media, the court ruled to uphold her conviction of leaking state secrets abroad. The court however, announced that her sentence would be reduced by two years, to five years. According to PEN’s sources, she is expected to serve the remainder of her sentence under house arrest owing to her health.

August reports raised concerns that Gao Yu’s health was deteriorating. Gao Yu is reported to suffer from heart disease and high blood pressure, as well as Menière’s Disease – a condition of the inner ear. According to news reports, she was sent for a medical check due to the fact that she has been frequently suffering from heart pain. The medical examination, conducted in July, is reported to have found signs of blockages in her arteries as well as abnormal lymph nodes in her neck. It is not yet clear whether the abnormalities are benign (please see previous update for more information).

Gao Yu was formerly the chief editor of Economics Weekly before being barred from publishing. She was first arrested on 3 June 1989 for an article she wrote for a Hong Kong newspaper supporting student protesters in Tiananmen Square, and was imprisoned for over a year. She spent a further five and a half years in prison from 1993-99 for ‘providing state secrets to parties outside [China’s] borders’ in a series of political and economic articles in Hong Kong-based publications. Gao is known for her fiercely critical political analysis and knowledge of the inner circles of the Chinese Communist Party.

She has continued to work in China as a freelance journalist in spite of considerable restriction and pressure. Gao Yu contributed an essay to PEN’s 2013 report “Creativity and Constraint in Today’s China.” She is an honorary director of ICPC and an honorary member of Czech PEN, Danish PEN and Swedish PEN. Her case was used as an emblematic case during PEN’s campaigning for International Women’s Day 2015 and the Day of the Imprisoned Writer 2014. Gao Yu’s case was also highlighted as PEN’s Empty Chair during the Writers in Prison Committee Conference held in Amsterdam in May 2015 during which members wrote messages of solidarity on post cards and sent them to her in prison.

As a signatory to the International Covenant on Civil and Political Rights, which provides for freedom of legitimate expression, the right not to be arbitrarily detained and the right to a fair trial, China is obliged to ‘refrain from acts that would defeat or undermine the treaty’s objective and purpose.