Join PEN’s ongoing vigils at the Saudi Embassy in London 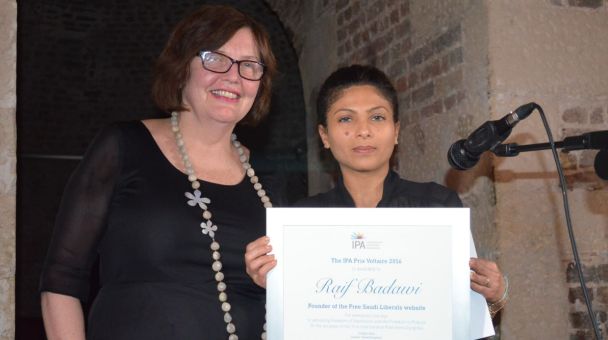 During a brief visit to London, English PEN met with Ensaf Haidar to discuss her husband’s case and the ongoing campaign for his release, to introduce her to some of her and her husband’s most dedicated London-based supporters, and to accompany her to the Saudi Embassy for an impromptu vigil.¬† She is very grateful for the ongoing efforts to secure her husband‚Äôs release and maintain awareness of his case, including through our regular vigils, and urged PEN and other supporters never to give up hope.

Haidar had travelled to London to accept the inaugural IPA Prix Voltaire from English PEN President Maureen Freely on behalf of her husband, whom Freely described as someone who ‘so fully embodies the values and courage that the prize seeks to honour’. She continued:

The freedom to publish is the essential condition for every publisher, writer, editor, translator and bookseller in this room. It is a freedom that can never be taken for granted, even in democracies, where legal challenges, injunctions, illiberal legislation and self-censorship can limit our ability to get the word out.

The winner of the IPA Prix Voltaire has experienced the most extreme restrictions possible on his freedom to publish ‚Äì restrictions that have robbed him of his personal freedom. A punishment that was handed down for doing no more than express an opinion -¬† a routine act for most of us, an act of immense bravery for him.

Haidar thanked the IPA for choosing Badawi as the recipient of the prize, the sixteenth international award he has received in less than two years, describing how crucial such recognition is, not only to her husband but to other activists around the world:

This important support and recognition goes beyond the issue of Raif Badawi. It tells him and other activists that they do not stand alone.

Please join us on from 9-10am on Friday 29 April to help show Raif Badawi, his family and other writers currently imprisoned in Saudi Arabia that they are not forgotten.

Activists are asked to meet at the Curzon Street entrance to the Embassy (note: the postal address of the Embassy is 30-32 Charles Street, Mayfair, London). Please do let us know if you plan to attend – #FreeRaif #FreeWaleed #FreeAshraf @englishpen [contact-form-7 404 "Not Found"]