Join us for this year’s Day of the Dead Festival 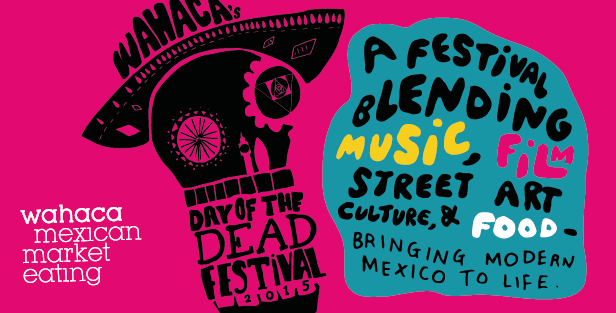 PEN is delighted to be hosting a series of talks as part of Wahaca‚Äôs Day of the Dead, a celebration of Mexican food and culture, at Tobacco Dock on 7 November.

As part of the festival, we are bringing an extraordinary range of Mexican and British artists, journalists, musicians and writers together to discuss their work, lives, and influences.

Mexico has been a focus for English PEN throughout 2015. We have taken action on behalf of murdered Mexican journalists including Jos√© Mois√©s S√°nchez Cerezo and Rub√©n Espinosa, and have hosted some of Mexico‚Äôs leading writers, including Elena Poniatowska, Juan Villoro and PEN Pinter Prize winner Lydia Cacho, here in London. We are honoured to be welcoming many more of Mexico‚Äôs finest writers and artists to the UK for what promises to be a fascinating and insightful series of talks.

We also hope to highlight the risks our colleagues continue to face on the ground in Mexico, where over 100 journalists have been murdered since¬†2000 and many others disappeared. ¬†As Homero Aridjis explains:

Mexico is a magical country where there are murder victims but no murderers, especially when the victims are members of the press.¬† But as the U. N. High Commissioner for Human Rights noted on his recent visit to my country, 98% of all crimes in Mexico remain unsolved.

There will be a very special ofrenda in tribute to Mexico‚Äôs fallen journalists, while 10% of all money spent on food and drink will be donated to the charity Periodistas de a Pie¬†, which works to protect journalists on the ground.

English PEN is delighted to be welcoming some of Mexico‚Äôs finest writers and artists to the UK for what promises to be a fascinating and insightful series of talks. Dia de los Muertos is a festival celebrated across Mexico to celebrate both mortality and life. By joining forces with Wahaca at the Day of the Dead festival, we hope to raise awareness of the work English PEN does to support writers and those passionate about the written word, and to highlight the dangers facing journalists in Mexico.

I am thrilled by our line-up for Day of the Dead this year, a huge celebration of what is great about Mexico, including its food, culture, film, art and music.¬† We are also hosting some fascinating talks with English PEN looking into the deeper politics and culture of what it is like to be a Mexican at the moment.¬† This is a country and people whom we care about passionately.

As a writer raised in a place that celebrates its dead, it’s perfect symmetry to spend the occasion with the world’s oldest human rights group remembering writers who died from telling the truth.

As a Brit who has reported on Mexico for 14 years, it warms me to see Londoners going for tacos, tequila, turntables and talks to celebrate the beauty of, and show solidarity with, a pais hermano.

I am delighted to visit London and join such a prestigious line up of people at the festival, celebrating the many wonderful aspects of Mexican life and culture.

The talks stage is just one of many happenings over the 12-hour festival. Other highlights include supper clubs hosted by Miers and Olvera; live music from Mexrissey, Toy Selectah, Crystal Fighters and many more; Mexican food and drink; a tattoo parlour; and a whole range of other delights.

Get your tickets here

To celebrate this year‚Äôs Day of the Dead, Wahaca are encouraging people to take to social media to remember their cultural icons who deserve to be celebrated in death. By posting a photo and tagging #WahacaDOTD ‚Äì entrants will be in with a chance of winning a VIP experience at the festival, plus ¬£250 of Wahaca vouchers.