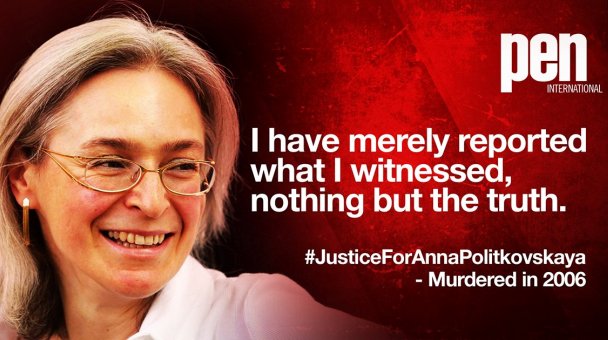 On the International Day to End Impunity for Crimes against Journalists, PEN calls on Russia to renew efforts to bring the masterminds behind the killing of Anna Politkovskaya to justice

Anna Politkovskaya was a prominent Russian investigative journalist and writer who garnered acclaim for her coverage of the Chechen conflict, and who was a vocal critic of President Vladimir Putin’s policy in Chechnya.  Her work led to threats against her life as well as severe harassment at the hands of Russian authorities. In 2004 she was poisoned on a flight, while on her way to negotiate the release of hostages in a school in Beslan, North Ossetia.

On 7 October 2006, Anna Politkovskaya was murdered in her apartment building in central Moscow. In May 2014 five men were finally convicted, after a lengthy retrial, of having been involved in Politkovskaya’s murder, including three who had been acquitted in a previous trial. In June 2014, all five were sentenced to prison terms, with two receiving life sentences.

Whilst welcoming this significant development, PENremains gravely concerned that those responsible for ordering the killing have not yet been brought to justice. On the International Day to End Impunity for Crimes against Journalists, PEN calls on the Russian government to renew its efforts to identify the masterminds behind the journalist’s murder and bring them to justice.

This petition is to urge Aleksandr Bastrykin, Head of the Investigative Committee of Russian Federation, to renew efforts to identify the masterminds behind the murder of journalist Anna Politkovskaya and bring them to justice.

Send appeals calling on the Russian authorities to demonstrate its commitment to end impunity for crimes against journalist and to uphold justice and freedom of expression by identifying and convicting all those masterminded Anna Politkovskya’s assassination.

You can send this appeal online via an electronic form here.

Please copy your appeals to the Embassy of Russia in your country.  A list of embassies can be found here.

Please send us copies of your letters or information about other activities and of any responses received.

PEN members are encouraged to publish articles and opinion pieces in your national or local press highlighting the case of Anna Politkovskaya and the situation of freedom of expression in Russia and impunity for crimes against journalists.