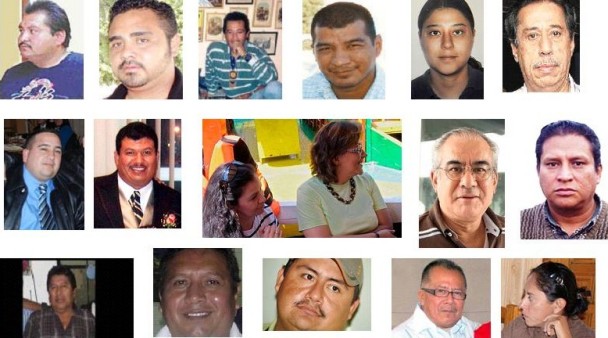 The deaths of four more journalists in Mexico in the last month – three of them in the space of a week – is a harrowing reminder of the dangers facing media professionals in the country.

PEN reiterates its call for swift and impartial investigations into all murders and suspicious deaths of journalists in Mexico that fully explore any possible links to their work. We call for the perpetrators to be prosecuted as a matter of urgency in order to send a clear signal that such violence will be not tolerated.

The death toll of Mexican print and internet journalists and bloggers since 2004 now stands at 71. Around 90 per cent of these murders remain unresolved, allowing violence against the media to thrive.

‘Four journalists dead in two weeks. You cannot claim to be a government when you cannot protect your citizens, when you cannot protect their freedom of expression, when your writers are being mercilessly slaughtered because they have raised their voices. The government of Mexico must assume its responsibilities. We are past the stage of urgency,’ said John Ralston Saul, International President of PEN International.

Early in the morning of 18 June 2015, Ismael Díaz López, a reporter for El Criollo and Tabasco Hoy newspapers, was stabbed to death by unknown individuals who broke into his home in the municipality of Teapa, Villahermosa, in Tabasco state, southern Mexico. Local news reports indicate that Díaz died on the way to hospital after being found by neighbours on his front lawn.

On 26 June 2015, the body of Gerardo Nieto Álvarez was discovered by his daughter at his offices in Comonfort, Guanajuato state, in central Mexico. According to news reports, the editor of the weekly paper El Tábano, voces independientes del Río Laja was found with his throat slit.

In the early hours of 1 July 2015, the body of 46-year-old Juan Mendoza Delgado, editor of the local news website Escribiendo la verdad (‘Writing the truth’), was found along the Santa Fe-San Julián de Veracruz motorway. Mendoza, who also worked as a taxi driver, was reported missing after he failed to return home in Medellín de Bravo, Veracruz State, southern Mexico, after his shift on 30 June. His family has reportedly challenged the official statements that he had been run over by a car.

Shortly before Delgado’s death, the Veracruz state governor linked some journalists to organised crime and warned them to ‘behave’. Veracruz is the most dangerous state in Mexico in which to be a journalist; according to PEN’s records, 11 print and internet journalists have been killed there since 2004.

On 2 July 2015, in neighbouring Oaxaca state, journalist Filadelfo Sánchez Sarmiento was shot dead outside of the offices of La Favorita 103.3 FM La Voz de la Sierra Sur radio station, where he hosted a news programme. Sánchez had also written for local newspapers, according to the Committee to Protect Journalists. Sánchez had reportedly been threatened with death in the run-up to the June 2015 congressional elections; the radio station is reported to regularly receive threats.

Official investigations into the murders of Díaz and Nieto are underway and are reportedly focusing on purported personal conflicts as the possible motive rather than their journalistic work.

In Diaz’ case, the police’s strongest line of enquiry is that his murder was linked to a family conflict, according to a tweet by the Tabasco state attorney general’s office (Fiscalía General del Estado). His wife and daughter are reported to believe that Díaz was murdered by his step-son, in complicity with his ex-wife.

In the case of Nieto, the Guanajuato state attorney general, Carlos Zamarripa Aguirre, was reportedly quick to deny the possibility of any connection to the murdered journalist’s work. According to news reports, Zamarripa claimed that, based on a preliminary analysis of the crime scene, Nieto’s murder was not connected to his work as a journalist, but was likely to be the result of an argument.

Investigators reportedly found empty bottles of alcohol and sharp-edged objects that could have been used as a weapon in his offices. Based on the evidence, the authorities believe that Nieto had been drinking with at least two others prior to his death and have summoned three people for questioning who they know to have been with Nieto in the hours prior to his death.

PEN is seeking to establish whether investigations have been opened into Mendoza and Sánchez Sarmiento’s deaths.

PEN calls on the Special Prosecutor for Crimes against Freedom of Expression (Fiscalía Especial para la Atención de Delitos cometidos en contra de la Libertad de Expresión – FEADLE) to assert its jurisdiction in all four deaths and to ensure that any possible links to the journalists’ work are properly investigated.

FEADLE is the federal authority responsible for the investigation and prosecution of crimes against freedom of expression, including the murder of journalists.