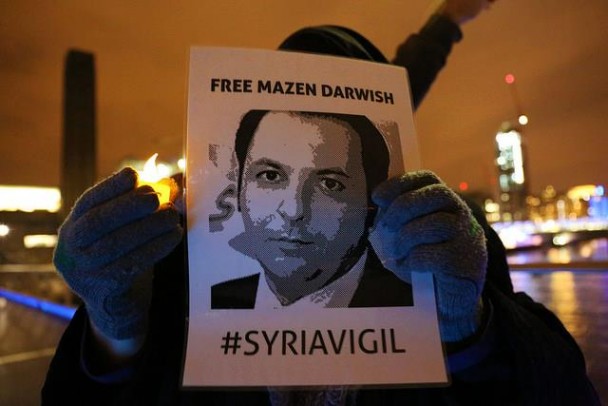 PEN warmly congratulates Syrian activist, journalist and winner of the 2014 PEN Pinter Prize for international writer of courage Mazen Darwish and his colleagues from the Syrian Center for Media and Freedom of Expression (SCM) Hussein Gharir and Hani Al-Zitani on their unconditional release.

Yara Bader, Director of the SCM and Mazen Darwish’s wife, has confirmed that the case against Darwish, Gharir, Al-Zitani and two other colleagues has now finally been closed. According to Bader, during a hearing on 31 August Syria’s anti-terrorism court ruled that the case of Darwish and his colleagues should be covered by the political amnesty that was announced more than a year ago, in June 2014.

As PEN argued when legislative decree No.22 was first announced in June 2014 and in the months since, the charges on which the three men were being held were included in the amnesty and they should therefore have been released immediately. Whilst we regret it has taken over a year for the decision to be reached and for the three men to be released, we are hugely relieved that they are now free.

This welcome news has been a very long time coming. Mazen Darwish, Hani Al-Zitani, Hussein Gharir and their families have suffered greatly during this period. Both their detention and their treatment were in breach of their human rights. It’s shameful that they continued to be held in prison for a whole year after the amnesty was announced. It’s now time for the remaining writers and activists in prison to be released immediately.

I’m so pleased to hear that Mazen Darwish and his colleagues have finally regained their freedom and that all charges against them have been dropped. I was honoured to hear Yara Bader, Director of the SCM and Mazen’s wife, speak passionately in defence of her friends and colleagues at UNESCO’s World Press Freedom Day in Riga earlier this year, and am delighted that her tireless campaigning and that of the international community has finally paid off.

Mazen Darwish was detained along with colleagues Hani Al-Zitani and Hussein Gharir in February 2012, when Syrian Air Force Intelligence raided the offices of SCM. The three men were detained for more than three years, at times in conditions amounting to enforced disappearance. During this time they were reportedly subjected to torture and other forms of ill treatment. PEN believes that Hani Al-Zitani, Hussein Gharir and Mazen Darwish were held solely for the peaceful exercise of their right to freedom of expression. Whilst we welcome their release, we continue to call for the release of the many other writers and activists who remain detained in Syria.