Syria: We remember Razan, Samira, Nazem and Wa’el five years after their kidnapping 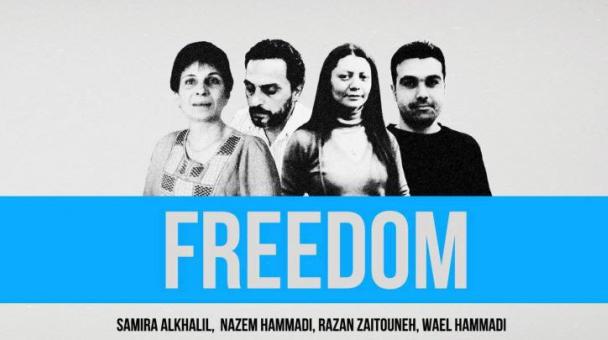 On 9 December, people around the world remember Razan Zaitouneh, Samira Khalil, Nazem Hamadi and Wa‚Äôel Hamada, kidnapped in Douma, Syria on this day five years ago. We, the undersigned human rights organisations, call on the United Nations, international and regional actors, and all parties to the Syrian conflict to actively facilitate an investigation into what happened to the four human rights defenders. They are among many Syrians who have been kidnapped, jailed, murdered or exiled for their peaceful human rights activities. We ask all friends and supporters to help remember Zaitouneh and her colleagues by sharing her work.

On 9 December 2013, a group of armed men presumed to be connected to the Army of Islam, a large local rebel faction at the time, broke into the Violations Documentation Centre (VDC) office in Douma city, kidnapped the four human rights defenders and took them to an unknown destination. According to unconfirmed reports, the Army of Islam kept captives, including possibly the VDC staff, at Tawbeh Prison for some time, but it has since been abandoned following the armed group‚Äôs departure from Douma in 2017.

Zaitouneh has published dozens of articles and reports on various websites and in newspapers about human rights including freedom of opinion and expression in Syria since 2004. In order to keep her work in the spotlight, her family has now published a website with a collection of her articles, as well as testimonies from people who admire her and worked with her.

She was awarded the 2011 Sakharov Prize for Freedom of Thought and the 2011 Anna Politkovskaya Award of Reach All Women in War (RAW in WAR). In 2013, the then-U.S. First Lady Michelle Obama honoured her as an International Woman of Courage. In February 2016, Zaitouneh was named prisoner of the month for the ‘Their freedom is their right’ campaign by Maharat Foundation, the Arabic Network for Human Rights Information (ANHRI) and the Gulf Centre for Human Rights (GCHR), with support from IFEX and its regional members. Zaitouneh was also a finalist for the 2016 Martin Ennals Award for Human Rights Defenders.

At the beginning of the popular protests that spread across Syria in 2011, Zaitouneh was forced into hiding owing to her media activism and her reporting on what was happening on the ground to various media outlets. Zaitouneh‚Äôs home in Damascus was raided in May 2011 by the government‚Äôs Air Force Intelligence, which then detained her brother-in-law and her husband Wa‚Äôel Hamada for three months. A few months before her abduction in 2013, Zaitouneh wrote about the threats she had been receiving and reported to human rights organisations outside Syria that the threats were from local armed groups in Douma.

‘Creating this website was my way of coping with her kidnapping,’ said her sister Rana Zaitouneh, who lives in Canada with other family members. ‘I felt that there were people who did not understand or were not aware of her important work. Razan has done so much for so many people, and yet never felt it was much at all. Her courage and determination are why we have to make her case a priority in these difficult times.’

‘Razan and Wael and their friends need to be found and released. I know my sister wants the whole world to know what has been happening in Syria and since she cannot currently tell people herself, I have to. My daughter and I decided to collect her articles and translate them to English so that they can be more widely accessible. It is also very important that the information be available to everyone who wishes to read it,’ she said.